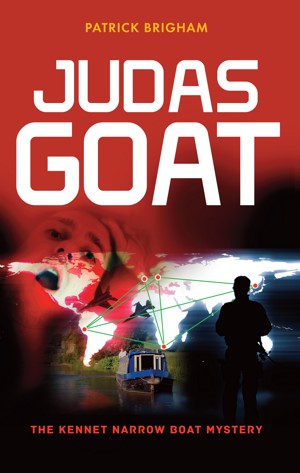 By Patrick Brigham
This is a book that starts off with the baffling murder of some anonymous individual on a Narrow-boat near the town of Reading in the UK. Set in a tranquil river setting it starts like any other murder mystery, but then it changes dramatically. In the end the story takes a turn, and we find ourselves reading about an international arms deal that has gone wrong. This is Morse meets James Bond! More
Sitting in a Lloyd Loom chair on a Narrow Boat, moored on the Kennet and Avon Canal, a dead man stares into oblivion. Who is he and what is his name? Chief Inspector Michael Lambert from Thames Valley Police Authority unravels a murder case which stretches from Reading to Bulgaria, South Africa to Belorussia, and finally Taiwan to Peru. What at first appears to be a straightforward murder is revealed to be part of an international manhunt, the result of a major arms deal which has gone horribly wrong. The story begins with the discovery of a small mobile phone on the narrow boat and ends with the murder of a Chinese shipping magnate in the streets of London. Will anyone’s life be the same again and how will our provincial policeman cope with these different layers of intrigue?
Available ebook formats: epub mobi pdf rtf lrf pdb txt html
First 20% Sample: epub mobi (Kindle) lrf more Online Reader
pdb
Price: $1.99 USD
Buy Add to Library Give as a Gift
How gifting works
Create Widget
Tags: mystery suspense mystery detective mystery contemporary romance mystery and crime anthology british detective mystery mystery adventure action fantasy mystery action suspense thriller british traditional mystery abroad
About Patrick Brigham

Born in Berkshire, England to an old Reading family, after attending an English Public School and a stint at college, the author Patrick Brigham went into real estate. After the economic crash of 1989, he licked his wounds, wrote two books and in 1993 decided to finally abandon London, the UK's casino economy and moved to Sofia, Bulgaria. The natural home of political intrigue, Communism and the conspiracy theory, Bulgaria proved to be quite a challenge, but for many of its citizens, the transition was also very painful. Despite this, Patrick Brigham personally managed to survive these political changes and now lives peacefully in Northern Greece, writing mystery novels. A writer for many years, he has recently written four 'good' crime fiction books, including, Herodotus: The Gnome of Sofia, Judas Goat: The Kennet Narrow Boat Mystery, Abduction: An Angel over Rimini, and finally The Dance of Dimitrios.

Confirming that the truth is very often stranger than fiction, Eastern Europe has proved to be Patrick Brigham’s inspiration for writing good mystery books. Much of his writing has been influenced by 20 years spent in the Balkans and the plethora of characters in his writing, are redolent of many past communist intrigues in Bulgaria.

Recently Patrick has delved into literary fiction, with his new book, Goddess of The Rainbow, a very Greek story involving a rain deluge, and how flooding changes people, moves the finger of fate, and causes us to reflect on our lives. A series of short stories, they all happen in the Greek town of Orestiada. Stories which simultaneously interlink and become a part of the whole, centre around Iris – the local DHL courier – who in Greek mythology is not only Goddess of The Rainbow, but also the Messenger of The Gods, thereby connecting the individual tales of this sixteen chapter book. All that and more; stories which come so beautifully together in the last chapter –fascinating and enchanting – which can be read and enjoyed individually, but put together, serve to make the whole novel greater than its component parts.

This year's novel is a stand-alone tale called The London Property Boy. Based on twenty years in the London property business, Patrick brings to life the excitement and intrigue of property dealing. With the fast buck and living high on the wing, comes disaster and the 80s draws to a close with another property crash.

Judas Goat - The Kennet Narrow Boat Mystery
This is a book that starts off with the baffling murder of some anonymous individual on a Narrow-boat near the town of Reading in the UK. Set in a tranquil river setting it starts like any other murder mystery, but then it changes dramatically. In the end the story takes a turn, and we find ourselves reading about an international arms deal that has gone wrong. This is Morse meets James Bond!

You have subscribed to alerts for Patrick Brigham.

You have been added to Patrick Brigham's favorite list.

You can also sign-up to receive email notifications whenever Patrick Brigham releases a new book.