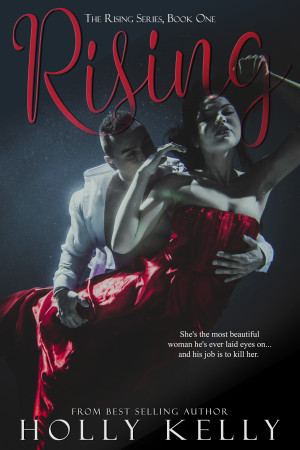 Killing her doesn’t start out as part of his plan. He entrenches himself deep in the human world. Aligning himself with his enemies, he prepares to send them to Triton to face their punishment. Then Sara Taylor rolls onto the scene. Xanthus knows at once she’s a criminal. And her crime? Being born. She’s a human/Dagonian half-breed, an abomination. Killing her should be an easy job. All he has to do is break into her apartment, slit her throat, and feed her body to the sharks. Simple, right? Wrong. If only she weren’t so beautiful, so innocent, so sweet...

Saving the world may have to wait. It appears Xanthus has a woman to save. But protecting her may cost him his own life.
Download: epub mobi (Kindle) pdf more Online Reader
rtf lrf pdb txt
Price: Free! USD
Add to Library
Create Widget
Tags: clean teen publishing
About Holly Kelly

I’m a mom who writes books in her spare time: translation—I hide in the bathroom with my laptop and lock the door while the kids destroy the house and smear peanut butter on the walls. ;) I was born in Utah but lived in Salina, Kansas until I was 13 and in Garland, Texas until I was 18. I’m now back in Utah–”happy valley”. I’m married to a wonderful husband, James, and we are currently raising 6 rambunctious children. My interests are reading, writing (of course), martial arts, visual arts, and spending time with family.

About the Series: The Rising Series

The Rising Series is perfect for fans of Freeform's new TV series SIREN.

They are loathed, they are despised, they will be wiped off the face of the earth—and they think their greatest threat comes from one another.

Humans are so naive.

There was a time when civilizations worshiped and revered creatures of myth. That time is long past. Up till now, the gods largely ignored humans. They were primitive, weak, and ignorant. But now, they are becoming a threat. The first to recognize the danger are the creatures that lurk beneath the waves—and they are now rising. Will humans win the affections of their enemy and survive the looming threat? Or will they find themselves at the mercy of not only sea creatures, but all mythological beings bent on their destruction?

Also in Series: The Rising Series

Reviews of Rising by Holly Kelly

I love this book It's way more than what I thought it would be. With that said, this book is worth the time to read.

I downloaded this book for free after contacting the publisher. I'd seen it advertised and was drawn in by the cover; especially that whale shark looking tail on that merman! Add sharks swimming in the background and I was sold.

This story is about a merman, or rather a Dagonian (a cousin species to the eradicated mer-people), named Xanthus, who is on a mission to bring to justice humans responsible for poisoning the ocean and thus, Dagonians. With the help of some godly magic, he can lose the tail for legs on land, and that's when his troubles begin. You see, there's this woman who thinks she was born disfigured but it turns out her malformed legs are really a tail! And Xanthus, well, he's in love... and that could get them both killed.

RISING was an entertaining read, but I did have to suspend belief a few times to make it work. Mostly because Sara has an actual tail and it's flesh-toned. She sits in a wheelchair and thinks she's disfigured, probably with sirenomelia - a genetic disorder in which a person is born with their legs fused together. This explanation in the book didn't work so well for me because Sara's tail is a perfectly formed and working TAIL. She would have to strap herself into her chair, as she shouldn't have knees (I assume, it's a fantasy book so the author can certainly have merpeople with knees in their tails), and then there is the whole *ahem* bodily orifices tucked into that tail issue. Ok, ok, I know it's a YA book but look at the underside of a whale/shark/dolphin/fish and start asking yourself about the location of ... Er. I'll stop right here. It's a YA book, people! Get your head out of the ink cloud!

All in all, I really enjoyed this book and look forward to the next in the series.

The cover is absolutely beautiful!! I was intrigued from the first moment I saw it! Marya did a fantastic job!

The story was phenomenal and I loved every moment of reading it! I couldn’t put it down in fact I read it straight through much to my son’s chagrin.

I totally fell in love with Xanthus and Sara. Sara is strong, independent, and doesn’t just cower and hide when something bad happens. I couldn’t imagine being confined to a wheel chair or people thinking you were an abomination. She is very strong and a great role model for not giving up. Xanthus is a fierce and protective warrior with a soft spot for Sara. He also sounds very dreamy :)

This is a awesome combination of mythology, sea creatures, and the real world. Can you imagine if Dagonians or mermaids were real? What if they lived among us? Do you think they would appreciate what we do to the world? I think it would be cool to swim the oceans and not fear for your life from sharks and everything else that lives in the ocean especially if Xanthus was by your side.

Okay the ending frustrated me, but you have to read it to see what I mean!! I can't wait to read more about this awesome world!! Holly totally rocks!! :)

I will definitely be adding this book to my library in paperback. If you like mermaid adventures, you will love this one!!

You have subscribed to alerts for Holly Kelly.

You have been added to Holly Kelly's favorite list.

You can also sign-up to receive email notifications whenever Holly Kelly releases a new book.