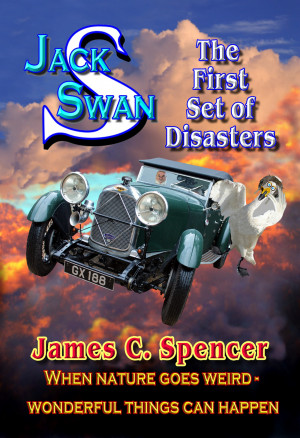 By James Spencer
Rated 5.00/5 based on 3 reviews
ridiculous comedy from britain, with a historical and scientific twist. almost a comic-book-for- adults, as there are many illustrations. the main character is a swan, who says that his ability to talk was because of an industrial accident. the science, is closer to reality rather than fantasy. More
Jack Swan Adventures is about a time travel experiment that goes hilariously wrong. An energy vortex gives two Salisbury swans the ability to speak and act as humans. The main character, Jack Swan, unfortunately, and unintentionally, destroys Britain's best tourist attraction, a country house and a small Wiltshire village. He helps solve an age-old mystery and may have found the true discoverer of America.
Available ebook formats: epub mobi pdf rtf lrf pdb txt html
First 20% Sample: epub mobi (Kindle) lrf more Online Reader
pdb
Price: $1.00 USD
Buy Add to Library Give as a Gift
How gifting works
Create Widget
Tags: comedy fantasy historic ageless
About James Spencer

“Jack Swan Adventures” came from bedtime stories composed some 40 years ago for daughter Xanthe, who still lives in Salisbury, England; locale for “Jack.”
Many of the stories use historic events. In book two: "Jack Swan Adventures - The Time Travel Disasters," the author uses his discovery of one of Mark Twain’s lost steamers on the Rio San Juan river, in Nicaragua. Also, in Panama the author researched how Albert Einstein may have helped in the rescue of Jewish families fleeing the Holocaust.

Currently, James is writing and researching the biography of Britain’s premiere parachutist; Elsa Spencer. David's childhood friend first parachuted from a balloon in 1901. Elsa was the inspiration for David and his brother to serve as paratroopers in the British Army.

James 14- year biographical odyssey of life in Central America; “The Accidental Adventure,” with true-life stories of mass murder, serial killers and political corruption will be ready in the spring of 2014.

Discovered Mr Swan and Mr Dell by some accident and little design; with hindsight, good fortune on both counts. Mr D's writing, for Jack, would seem to be sourced from a robustly large and vivid imagination, sprinkled liberally with extra helpings of mischief and craft. The perfect inspiration for other would be story tellers. Our daughter (7 yrs old now) loved the vivid story lines, laughing throughout her reading. I would heartily recommend this book to old and young alike who are seeking some harmless yet joyful escapism from the modern age. As and aside to Mr D, his mischief and craft could be equally well applied to certain political environments and well-received by a more mature audience. Keep it up, we are expecting more soon!

In place for thousands of years, part of Stonehenge has been destroyed. A World Heritage site in Wiltshire, England, the pagan circle of massive stones was being used in a movie shoot. There are multiple theories about how the stones - one 25 feet tall - were moved so long ago without heavy equipment miles from where they are believed to have originated.
However, movie extra Jack Swan apparently had no difficulty. He caused a multi-ton boom to fall into one of the stones which started a chain reaction like a row of dominoes.

Jack, a bumbling, accident-prone, talking swan is the star of a volume of short stories by David Dell who crafts a blend of fantasy, humor and history into entertaining reading for adult and youth alike. It is a page-turner just to find out what havoc Jack will create next. Jack Swan Adventures: The First Set of Disasters, $4.99 from www.smashwords.com.

If you are looking to be the Favorite Aunt or Uncle in your family, this book is a must have. The series of mishaps will keep the young ones and you laughing out loud. I cannot wait to share it with all my friends and family.
This adventure will quickly turn into your families classic bed time stories.
Well done Mr Dell, well done.

You have subscribed to alerts for James Spencer.

You have been added to James Spencer's favorite list.

You can also sign-up to receive email notifications whenever James Spencer releases a new book.