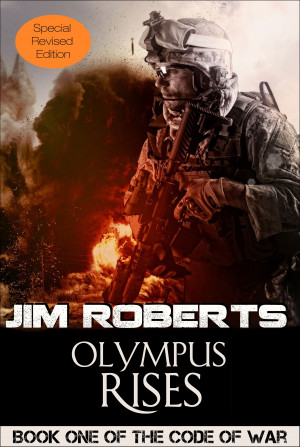 Olympus Rises (Book One of the Code of War)

There, with the help of a few friends, they must effect a daring escape and find the secret to the enigmatic Code of War.

Jim Roberts was born in Yorkton, Saskatchewan. Growing up in Alberta, he studied theatre, screenwriting and motion picture arts at Red Deer College.

A voracious reader, his literary love spans every genre, but especially the works of Ian Fleming, David Morrell, and Robert E. Howard.

The amazing renaissance of digital publishing has given him a perfect opportunity to release his longtime pet-project: The Code of War.

Jim currently resides in Red Deer, Alberta where he is hard at work on the next Code of War novel.

I did not like this one, but I haven't read on after approximately the first half.
Continuation of the Afghanistan war by Rambo-like boxing matches? The enemy proves to be a "seductive woman" (P. 124)? nope.

Secret armies. Ninja-women. Super-powered suits. I live for this stuff.

What starts as a very-grounded military thriller in the last days of the Afghanistan operation ends up in a very different place. I'll try to avoid too many spoilers because part of the fun of Olympus Rises is watching the story escalate.

This is what the GI Joe movies should have been like. The action is intense and the characters feel heroic. There is a cinematic feel to Roberts writing and every military element feels well-researched and genuine.

If you're looking for a well-written, high-adrenaline adventure, you've found it

Olympus Rises by Jim Roberts is a fast-paced speculative fiction novel featuring the exploits of Danny Callbeck, a Canadian Special Forces operative assigned to a joint mission with an elite unit in the war-torn country of Kazinistan. The regime of President Asamat Karimov is under siege by forces of the Taliban, and the commandos find themselves pitted against a Private Military Company spearheaded by a cyber-enhanced unit known as Olympus. Danny and his teammates, Joe Braddock and a Russian mercenary called Krieger, find that Dr. Toshiro Yune holds the key to a devious conspiracy. The conflict rises to a fever pitch as Colonel Jackson Walsh forces Danny to choose between Joe and the success of the mission itself. Time becomes his worst enemy as Commander Dante, the formidable Agrippina and their robotic Centurion force looms along the collision course ahead.

The theme of comradeship resonates throughout the tale as we explore the relationships between Isabella Cordova, Brick Reynolds and Corporal Tennyson among other members of the commando team. Although they represent different races, creeds and genders, they are part of the band of brothers who will readily risk their lives in defense of their comrades. The validity of their mission is called into question as they are thrown into a battle against private army in a foreign country where interests and allegiances are cloudy at best. Roberts raises the question as to how far our military will be forced in defending our allies abroad, and where we and they will finally draw the line.

For military aficionados and action/adventure fans alike, Olympus Rises by Jim Roberts is a worthy addition to any book lovers’ collection.

Good book, interesting story well told. It certainly sets the scene for a series using the same characters. Look forward to more work by this author.

This book lies outside my usual mystery genre, but the cover drew me in. I'm glad it did. I enjoyed the read.

A very fun read, much in the vein of a David Drake or David Gemmell novel. Pulls no punches and exciting for fans of militaristic action. Would not be out of place in a G.I.Joe style flick.

My only issue came in the formatting which admittedly may have just been my reading device, paragraphs would jump and be weirdly compressed at seemingly random intervals.

Overall a very good first book. Looking forward to more from this author.

An interesting read, I enjoyed the book on the whole. I look forward to the second book. I found the plot like a classic G.I Joe story plot, which for me was a good thing.
Personally, I felt as if the story was only half told, so I want more and look forward to reading the second book even more thinking there was more to be told.
A real blast at 5 Stars!!!!

You have subscribed to alerts for Jim Roberts.

You have been added to Jim Roberts's favorite list.

You can also sign-up to receive email notifications whenever Jim Roberts releases a new book.