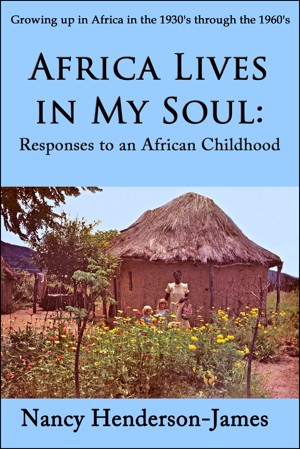 Africa Lives in My Soul: Responses to an African Childhood

I grew up from the age of 2 until 16 in Angola, then a Portuguese colony on the west coast of Africa. I was the child of United Church of Christ missionaries. I attended a variety of schools, at home taught by my mother, at a small missionary kids' school on the mission of Dondi, at a British high school in the colony of Southern Rhodesia, now Zimbabwe, and schools in the United States when the family was there on furlough. I graduated from Carleton College and obtained my Masters in Library Science at Pratt Institute. After a long career as a librarian, I wrote At Home Abroad: An American Girl in Africa. I conducted a survey of Third Culture Kids, mostly missionary kids from Africa, and compiled the responses into this book. I have published essays and chapters in Unrooted Childhoods: Memoirs of Growing up Global; Writing Out of Limbo: International Childhoods, Global Nomads and Third Culture Kids; and magazines. I welcome contact with my readers.

You have subscribed to alerts for Nancy Henderson-James.

You have been added to Nancy Henderson-James's favorite list.

You can also sign-up to receive email notifications whenever Nancy Henderson-James releases a new book.