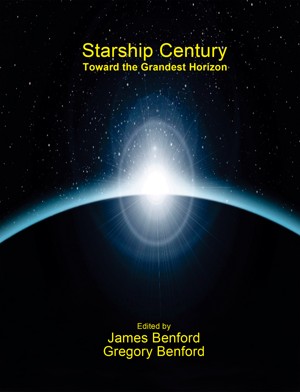 Starship Century: Toward the Grandest Horizon

This groundbreaking anthology of science and science fiction is based on findings and discussions of the 100-Year Starship Symposium held in 2011. In it, top scientists tackle the opportunities for our long-term future in space. Alongside them, science fiction authors explore the dream and the possibilities.
Available ebook formats: epub lrf pdb html
First 15% Sample: epub lrf pdb Online Reader
Price: $9.90 USD
Buy Add to Library Give as a Gift
How gifting works
Create Widget
Tags: science space travel starship hard sci fi anthology science fiction fiction about space starship symposium
About Gregory Benford

Gregory Benford is the author of more than 20 novels, including Jupiter Project, Artifact, Against Infinity, Eater, and Timescape. A two-time winner of the Nebula Award, Benford has also won the John W. Campbell Award, the Australian Ditmar Award, the 1995 Lord Foundation Award for achievement in the sciences, and the 1990 United Nations Medal in Literature.

Benford is a professor of physics at the University of California, Irvine, where he conducts research in plasma turbulence theory and experiment, and in astrophysics. He has published well over 100 papers in the fields of physics from condensed matter, particle physics, plasmas and mathematical physics, and several in biological conservation.

Reviews of Starship Century: Toward the Grandest Horizon by Gregory Benford

You have subscribed to alerts for Gregory Benford.

You have been added to Gregory Benford's favorite list.

You can also sign-up to receive email notifications whenever Gregory Benford releases a new book.