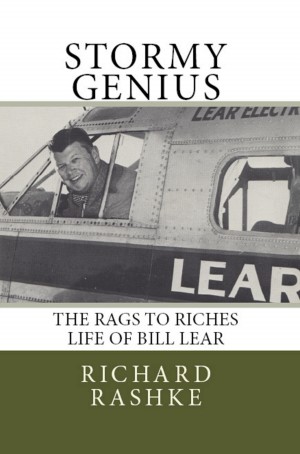 By Richard Rashke
"Reckless, abrasive, egocentric, conniving, wife-cheater...indeed a genius...Interesting reading for all..." The Witchita Eagle-Beacon More
"Bill stirred men's blood," said one of Lear's employees, and after reading this spirited biography by the author of The Killing of Karen Silkwood, the reader understands why. Although lacking formal education, especially in science, Lear was an inventive genius, his interests ranging from radio to airplanes, wire recorders, prefabricated homes and steam-powered cars. His 150 patents included a radio direction finder and an automatic pilot for planes, and the eight-track tape, designed originally for automobile stereos. And, while he focused on his invention of the moment with monomaniacal intensity, Lear found time to contract four marriages, sire seven children and have many mistresses, some for years. A stubborn, opinionated, difficult man who made and lost several fortunes, his technological intuition rarely led him astray, although he was ill-suited to manage his various companies. His life story is absorbing." Publishers Weekly

RICHARD RASHKE is a lecturer and author of non-fiction books including STORMY GENIUS: The Life of Aviation's Maverick Bill Lear, USEFUL ENEMIES: John Demjanjuk and America’s Open Door Policy for Nazi War Criminals, ESCAPE FROM SOBIBOR, and THE KILLING OF KAREN SILKWOOD. His works have been translated into eleven languages and have been the subject of movies for screen and television. A produced screenwriter and playwright, his work has appeared on network television and off-Broadway. He is also an alto sax player and composer. His latest composition, CRANE WIFE, a family musical based on a Japanese folktale, was performed at the Kennedy Center, and a new play, DEAR ESTHER, based on a Sobibor prisoner, will open in 2013. He lives in Washington, D.C.

You have subscribed to alerts for Richard Rashke.

You have been added to Richard Rashke's favorite list.

You can also sign-up to receive email notifications whenever Richard Rashke releases a new book.