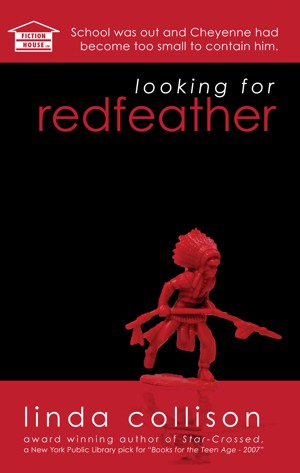 By Linda Collison
Rated 5.00/5 based on 1 review
"Looking for Redfeather" is a twenty-first century, coming-of-age story featuring Ramie, Chas and LaRoux --three runaway teens from various parts of the United States who meet up by chance and go on the road looking for an Apache named Redfeather, a musician who Ramie believes to be his father. Life is a highway, but this ain't Jack Kerouac's road trip! More
Life is a highway...

Fifteen-year-old Ramie Redfeather leaves Cheyenne with music in his pocket and his thumb in the air. He’s looking to find his father, a man he’s never met. Ramie gets a ride with Chas Sweeney, a seventeen-year-old driving a “borrowed” Cadillac Eldorado with Maryland tags, who just happens to be passing through Cheyenne. Chas is running from the wreckage that is his world, sixteen hundred miles away. In Denver Ramie and Chas meet Mae B. LaRoux, an enchanting young singer from Baton Rouge. LaRoux, who struggles with a learning disability, is on a mission to become a professional musician. The three runaways band together and set out on a fast-paced road trip to get to the Austin Music Festival, looking for Redfeather along the way.

"Looking for Redfeather" takes place on the road --but it's not Kerouac's road trip! A twenty-first century teenage road adventure.

Novelist, short story and screenwriter. "I write because I can't sing."

Linda Collison's first published novel, Star-Crossed (Knopf), was chosen by the New York Public Library to be among the Books for the Teen Age - 2007. The coming-of-age novels Looking for Redfeather and Water Ghosts were finalists in Foreword Review's Indie Book of the Year. Her novel Blue Moon Luck won the erstwhile Maui Writers Conference grand prize for fiction in 1996.

Linda is also the author of the Patricia MacPherson Nautical Adventure Series, based on Star-Crossed. She has worked as a freelance magazine writer, a registered nurse in critical care and emergency medicine, a skydiving instructor, a volunteer firefighter, and a mother. Her short fiction and creative nonfiction has won awards from Honolulu Magazine, Southwest Writers Magazine, Maui Writers, and the National Student Nurses Society.

Reviews of Looking for Redfeather by Linda Collison

Linda Collison captures the voice and spirit of three dysfunctional teenagers, each running away from a hated life in search of something better. The greatest strength of this book is in the relationships among the deftly drawn characters. Beneath all the profanity-laced bravado, pot-smoking and underage drinking, these kids still find a sense of kindness and for doing the right thing for each other despite doubts, fears and disappointments. Collison’s descriptive writing summons the essence and heart of the old-fashioned road trip across the desert southwest, and in the process she addresses the desire to run away that haunts many of us—that sometimes in running away from ourselves we haven’t realized that whatever we think is missing from our lives has been hidden inside us all along. A fun, short read for the teenager in all of us.

You have subscribed to Smashwords Alerts new release notifications for Linda Collison.

You have been added to Linda Collison's favorite list.

You can also sign-up to receive email notifications whenever Linda Collison releases a new book.