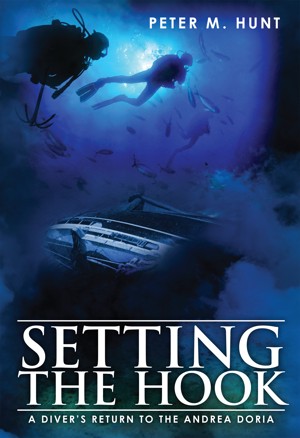 Setting the Hook, a Diver's Return to the Andrea Doria

By Peter Hunt
Peter Hunt crewed on five Andrea Doria expeditions, the “Mount Everest of wreck diving,” in the early 1980s before becoming a Navy pilot. Twenty years later, Hunt set out to dive the famous luxury liner again. An introspective odyssey of memory and heart-pounding adventure, Setting the Hook explores thirty years of extreme diving in a personal tale of learning to accept life’s oldest challenge. More
The 1956 collision of the Andrea Doria and the Stockholm triggered a night of sheer terror for the Andrea Doria’s 1,706 passengers and crew and set in motion one of history’s most dramatic rescues at sea.

From the moment the Andrea Doria settled on the sea floor in 240 feet of water, skilled sport divers have risked their lives to simply touch the “Mount Everest of wreck diving.” Not all returned alive.

Peter Hunt crewed on five Andrea Doria expeditions during the early 1980s before becoming a Navy pilot and settling in Washington State. Nearly twenty years after first exploring the Andrea Doria - and following twelve months of training in the sport’s amazing advances in equipment and techniques - Hunt hugged his wife and children goodbye and returned to New York to dive the Andrea Doria once again. The experience transformed him forever.

Setting the Hook explores the Andrea Doria through an introspective odyssey of memory, heart-pounding adventure, and history as thirty years of extreme diving and enduring friendships merge in a personal tale of learning to accept life’s oldest challenge.

A deep-sea diver explores shipwrecks and his own character in this gripping scuba memoir…Hunt’s taut scenes and meticulous prose will have readers holding their breath, but his saga probes hidden depths as well. -Kirkus Reviews

"Setting the Hook" is excellently written, well structured, and superbly proofed…fully delivered on the diving, adventure and technical fronts, but it was the human angle of the author's very personal journey that elevates this much recommended book. -C. H. Blickenstorfer, scubadiverinfo.com

…a book truly meant for everyone…heartfelt and inspiring story of diving, the fragility of life, and a reflection on our humanity. -Dive News Network Media Group, publishers of five regional print and electronic magazines

…the story of a wreck diving pioneer and the personal story of a man…Setting the Hook is a great read…well written…a great diving book, but an even better people book. -Charles George, Wreck Diving Magazine

Born in New York, Peter Hunt spent six years of his childhood in Athens, Greece, where he started diving in 1978. Hunt worked on several wreck diving boats based out of New York during high school and college, including the Wahoo, from which he made 13 dives to the Andrea Doria in 1983 and 1984. After graduating with a history degree from Brown University, Hunt joined the navy and trained as an A-6 Intruder attack pilot. During his naval service, he completed three aircraft carrier deployments to the Persian Gulf, Indian Ocean, and Western Pacific over ten years of active duty, earning the Distinguished Flying Cross and three Air Medals. Hunt went on to fly for United Airlines until being diagnosed with Parkinson’s disease in 2005 at age 43. That is when his writing began in earnest. Peter Hunt holds a master’s degree from the University of Washington, is the father of two adult children, and lives with his wife on Whidbey Island. He is the author of Angles of Attack, Setting the Hook, and The Lost Intruder.

Reviews of Setting the Hook, a Diver's Return to the Andrea Doria by Peter Hunt

You have subscribed to Smashwords Alerts new release notifications for Peter Hunt.

You have been added to Peter Hunt's favorite list.

You can also sign-up to receive email notifications whenever Peter Hunt releases a new book.