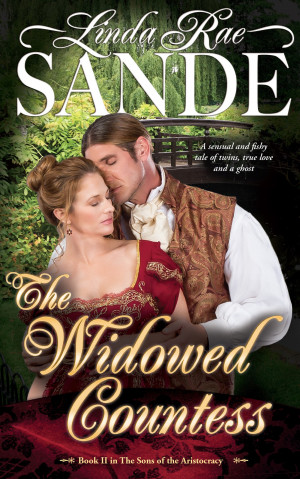 The Earl of Norwick may have just died, but his ghost is paying nocturnal visits to his wife, Clarinda. She's pregnant and a bit worried about her late-husband's identical twin brother, Daniel, becoming the earl. He claims he was the one who courted her and that she married David merely to be his countess. But David is trying to set the record straight while insisting his death wasn't an accident. More
Clarinda hasn’t seen her late husband’s identical twin since she slapped him for his insolence all those years ago. The horrible things he accused her of still ring in her ears. But she’ll just have to learn to put all that behind her now. Because while the child she’s carrying might be the next earl, it’s Daniel Fitzwilliam—the man she secretly loved before she married his brother—who will assume the duties of the earldom until the heir is of age.

Daniel has loved Clarinda since her come-out. Circumstances—and an untimely case of mistaken identity—cost him his chance with her once, but he’s not about to let that happen again without a fight. When she’s out of mourning, he fully intends to properly court her...if she’ll have him, that is.

Soon, Daniel and Clarinda find themselves dealing with the arrival of the dowager countess, the appearance of the late earl’s disgruntled ghost, and the rather fishy circumstances surrounding his death. Can they overcome everything that stands between them and find their way back to each other? Or will their second chance at love end as badly as their first?
Available ebook formats: epub
Price: $4.99 USD
Buy Add to Library Give as a Gift
How gifting works
Create Widget
Tags: romance ghost london twins regency sussex
About Linda Rae Sande

A self-described nerd and lover of science, Linda Rae spent many years as a published technical writer specializing in 3D graphics workstations, software and 3D animation (her movie credits include SHREK and SHREK 2). An interest in genealogy led to years of research on the Regency era and a desire to write fiction based in that time.

A fan of action-adventure movies, she can frequently be found at the local cinema. Although she no longer has any tropical fish, she does follow the San Jose Sharks. She makes her home in Cody, Wyoming. For more information about her books, go to her website: www.lindaraesande.com.

About the Series: The Sons of the Aristocracy

Three Regencies featuring the stories of the sons of the peerage and their pursuit of the perfect bride—whether they know they're in search of her or not.

Also in Series: The Sons of the Aristocracy

Reviews of The Widowed Countess by Linda Rae Sande

You have subscribed to alerts for Linda Rae Sande.

You have been added to Linda Rae Sande's favorite list.

You can also sign-up to receive email notifications whenever Linda Rae Sande releases a new book.