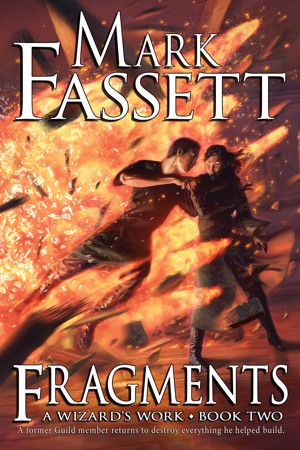 By Mark Fassett
Six months after Robert defeated Orliss Kilore, the shattered Wizard's Guild refuses to admit him. Angela hasn't seen Robert in those six months. Watching Gerard and Nina together only serves to make her want to finish her apprenticeship so she can be with Robert. When a wizard long thought dead reappears to take his revenge on the Guild, the apprentices must find a way to stop him. More
Denied Admittance

Six months have passed since Robert proved he completed his apprenticeship by defeating Orliss Kilore, yet the shattered Wizard’s Guild will not admit him to their membership. They claim they are protecting him, but he believes they have some other motive.

Angela has not seen Robert in months, not since the funeral for her old mentor, Monteous Roarke. Her studies at the new Wizard Academy consume all her time. Gerard only seems to have time for Nina, until his Uncle appears at the gate and informs him of his brother’s untimely death, and demands that Gerard return home.

When a wizard long thought dead reappears to take his revenge on the Guild that expelled him, the apprentices must once again rush to find a wizard that can help them. Only this time, he does not want to be found.
Available ebook formats: epub mobi pdf lrf pdb html
First 20% Sample: epub mobi (Kindle) lrf more Online Reader
pdb
Price: $5.99 USD
Buy Add to Library Give as a Gift
How gifting works
Create Widget
Tags: adventure fantasy wizards sorcery quest quest adventure fantasy about a magician wizards council

You have subscribed to alerts for Mark Fassett.

You have been added to Mark Fassett's favorite list.

You can also sign-up to receive email notifications whenever Mark Fassett releases a new book.