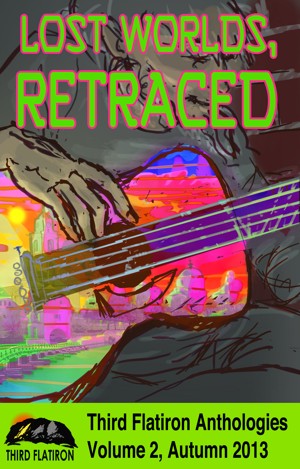 By Third Flatiron Publishing
Rated 3.00/5 based on 1 review
Third Flatiron presents "Lost Worlds, Retraced," with over a dozen new
SF/Fantasy/Horror short stories about lost worlds and parallel
universes. If Discovery Channel shows like "Ancient Aliens" or "Man
vs. Wild" are among your guilty pleasures, this could be the
anthology for you. More
Ever wonder what became of those fantastic worlds described by
A. Conan Doyle and Edgar Rice Burroughs? Third Flatiron Publishing
presents "Lost Worlds, Retraced," a spate of new speculative fiction
short stories by an international group of award-winning and emerging
writers. Contributors include Maureen Bowden, Ron Collins, Neil
Davies, Judith Field, Bruce Golden, Sarah Hodgetts, DeAnna Knippling,
Andrew Kozma, Marilyn K. Martin, Will Morton, Konstantine Paradias,
Soham Saha, and Jonathan Shipley.

Marliyn K. Martin has an amusing take on "primitive humans of the ancient past"
and what we get out of nurturing this idea of the simpler, charming ignorance of our ancestors.
Think of it as "The Gods Must be Crazy" plus time travel.

Jonathan Shipley captures some of the murky ethics involved in refugee crisis management,
sketching a U.N.-like organization handling the death of an entire planet.

Konstantine Paradias pens a charming version of "Wind and the Willows" during a kind of
Salem Witch Trials.

Soham Saha's affecting piece "Parallelobirds" describes a colony ship gone awry, not unlike a
"Riddley Walker" in space. I especially enjoyed the frisson of "Arc" instead of "Ark"
as initially I imagined arc sodium lamps lighting a huge ship or perhaps a Ringworld-style
huge orbital habitat until my brain figured it out ;)

Maureen Bowden's "Jango Rides Again" first and foremost has some beautiful British slang in it that really warmed my belly. And much as I might dislike bikers, Bowden managed to squeeze some sympathy for them out of me. In the story, due to "mental embargo," her protagonist Han's uncle has successfully hidden his 560 years, until to seek a parallel universe where her favorite biker did not die, Han goes into her uncle's inner sanctum of magic books. The root of the word "magic" is "to have power" and in this sense Bowden knows well the magic of words. But, what is the nature of their power? I don't believe this question has an answer, but Bowden understands what not many do, that part of it is their nature of disguise, to cover what we might not otherwise want to see.

DeAnna Knippling's fable about power is swift and affecting.

Judith Field's "Lindlow Five" is sort of a Wiccan Mod Squad, battling the dastardly with magic and gadgets.

Ron Collins revamps the Terminator mystique with some quantum physics.

Bruce Golden has the funniest story in the collection, "Ninth from the Sun," imagining the 9 planets as baseball players in the locker room, sad that Pluto's been cut from the team and "sent down to the dwarf league."

Will Morton's promising story of science in a parallel universe is unfortunately torpedoed by its hamhanded union-busting politics, although, it must be said, there's a rich history of it in science fiction.

And Neil Davies rounds up the collection with an updated Dr. Livingstone as a reality TV star stumbling upon the secret den of the Oompa Loompas.

Overall the collection is a little hammier than I tend to like my pork-based science fiction products, but the moments of piquancy are generally enough to balance out the juvenalia.

(reviewed 34 days after purchase)
G Miki Hayden reviewed on Sep. 5, 2013
(no rating)
Editor Juliana Rew has provided an anthology series from Third Flatiron Publishing that allows, at least in Lost Worlds, 13 authors to express their fantastic visions of the past, future, parallel universes, and whatever we might have in our here, there, and everywhere. What a blessing for both writers and too-busy-for-going-through-a-long-piece-of-work-right-now readers.

My favorites here won’t be your favorites, and that’s one thing so lovely about having an anthology—it’s a smorgasbord of flavors to fit so many tastes. (No sardines please, but how about some meatballs.) The ones I liked best? “Lindow Five” by Judith Field combines magic with a bit of time travel and action with characters we genuinely like. “Schrödinger's Soldier” by Ron Collins proposes a solution to the end of our universe—or does it? Yes, physics is involved.

These, plus 11 other bell-ringing, inventive stories are yours forever for a mighty small price, so boot up your readers—or download to your PC. “Jango Rides Again” (great language use) by Maureen Bowden takes us into the magic room at the back of Uncle Leo’s bookshop. “Parallelobirds” by Soham Saha is a sad tale of a space mission in which slinkies take the stage. And “Breach of Contract” by Andrew Kozma shows the dangers of doing business in a very different context. Enjoy one, enjoy them all on your commute or while waiting in line at the post office in our usual universe.