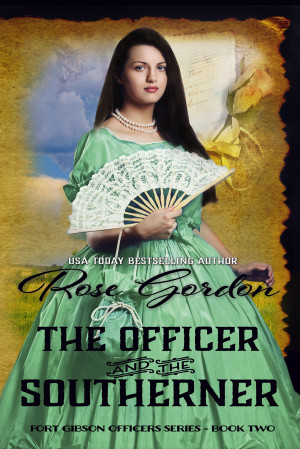 The Officer and the Southerner (Western Historical Romance)

Upon arrival at a forsaken military fort in the middle of Indian Territory, Ella Davis learns Jack's situation isn't quite what she's believed from his letters and while hoping to avoid such a fate, she's been made the fool again. Unfortunately, this time she can't run and hide from the man who's done her wrong, but neither is she convinced their marriage will be the same one she'd envisioned for them...

Now it's up to Jack to find a way to show his always skeptical bride that he is indeed trustworthy and that despite what she might believe she does belong somewhere in the world: right there, with him.

The Officer and the Southerner by Rose Gordon
Officer Series Book 2
Second Lt. Jack Warner has sent for a mail-order bride. His friends thought it was a bad idea, so he kept it to himself. Out of all the letters he received there was one that seemed to stick out. He really hoped this one would agree to come out and marry him.

Ella Davis just had another suitor propose publicly….only not to her. She was tired of such humiliation. Her sister had a way of cheering her up though. She would read ads from men wanting a mail-order bride and they would laugh at them together. This particular night there was one ad that sounded authentic enough to write back. What could it hurt to just write and find out more about the man?

Journey to Fort Gibson with Ella as she goes with a heart full of hope for a new life with the man in her letters. Too bad things aren’t quite the same as described in those letters. But these guys are such sweethearts they are bound to win their women over.
**Sexual situations within marriage
http://justjudysjumbles.blogspot.com/2011/10/rose-gordon-booklist.html