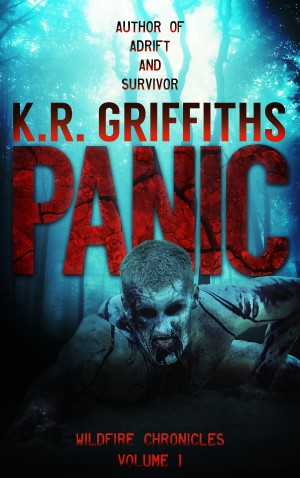 By K.R. Griffiths
Rated 3.00/5 based on 1 review
Michael Evans is only in rural St. Davids to maintain a low profile after his time spent as a city cop ended in disaster. The town is perfect for him: isolated. A tiny population. Virtually no crime.

But when the residents begin killing each other with their teeth, Michael quickly realises that what he thought was a crime scene is something far, far worse... More
Michael Evans is only in rural St. Davids to maintain a low profile after his time spent as a city cop ended in disaster. The town is perfect for him: isolated. A tiny population. Virtually no crime.

Until the night the strange canisters fall from the sky and the town priest starts killing people with his teeth. To Michael, the bloodbath looks like a murder case that the quiet town's two police officers can't possibly handle.

But this isn't just a crime scene.

After 15 years spent living and working in London, he now resides in Wales with a cat that thinks it is a dog and an imagination that sometimes concerns even him.

Panic is definitely a different approach on the apocalyptic tales that have sprung up lately. After a mysterious canister lands in a small town, the residents begin to change into eyeless zombie-esque creatures from a seemingly blood-born illness/effect. The book often switches between different characters and their points of view, so it's hard to establish early on who's going to be the main character. A pet peeve of mine with this book, or maybe a stroke of genius on Griffiths part, was to get you invested in a character only for it to die. It occurs so much that I lost interest in becoming invested in any of the characters.

Towards the ending, you do see that a main character is established. But I was disappointed with the predictable ending and cliff hanger. A trigger warning should be included for a couple of the scenes at the end, as well.

This book is fast paced, though. I was surprised to notice how quickly I was reading it. Regardless of my pet peeves and dislikes, Griffiths knows how to keep the flow going well. There were a few editing mistakes (misspelled words and the like), but they are easily overlooked and forgiven.

All in all, Panic was a decent read. I would recommend it to the die-hard apocalyptic genre crowd. Though, I'm not interested enough to read the rest of the series.

**I was gifted this book for free in exchange for an honest review.

You have subscribed to alerts for K.R. Griffiths.

You have been added to K.R. Griffiths's favorite list.

You can also sign-up to receive email notifications whenever K.R. Griffiths releases a new book.