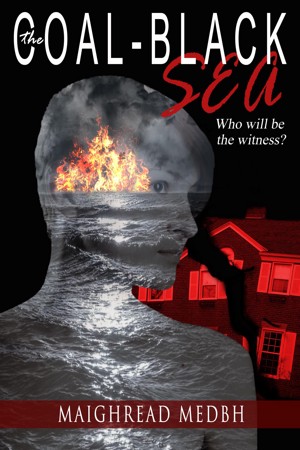 Set in Dublin and spanning a time period from 1976 to 1999, The Coal-black Sea is a novel of violence, frustration, introspection, and illusory desire. Obsessed with her every feeling, Joan Fey finds herself abusive and moral in a confused mix. She may be to blame for criminal acts, but without a witness, who will be her judge and jury? More
Set in Dublin, Ireland, The Coal-black Sea is a journey in the mind of a complex, self-obsessed and, betimes, violent woman called Joan Fey. We meet her first as an irritable and somewhat abusive mother, and after the situation reaches crisis, we are taken on a retrospective trip to her first days in 1970s Dublin, when she arrived from her rural home in hope of liberation. Erratic moods, intellectual yearnings, confused sexuality and delusions conflate in this reclusive and inflammable character. The result is murder, abandonment and perverse love. Finally, the question is a philosophical one—that of culpability. How much are we to blame for our actions? Can we apply justice to ourselves? How much guilt can one woman hold in secret?
Available ebook formats: epub mobi pdf rtf lrf pdb txt html
First 20% Sample: epub mobi (Kindle) lrf more Online Reader
pdb
Price: $2.99 USD
Buy Add to Library Give as a Gift
How gifting works
Create Widget
Tags: fiction murder guilt police bisexual justice ireland philosophy woman introspection dublin 1970s outsider family violence depressed mother 1990s personality disorder child death culpability emotional dysregulation
About Maighread Medbh

Maighread Medbh was born in Co. Limerick, Ireland, and now lives in Swords, Co. Dublin. Widely known for her experimental approach to text and powerful performance style, she has been described as ‘a unique presence in the Irish literary scene’. Following her debut poetry collection, The Making of a Pagan (Belfast: Blackstaff Press, 1990), the conviction that poetry emerges from one’s body led her to experiment with musical rhythms and moved her towards dramatic poetry. In the nineties, much of her work addressed political and social matters, and was primarily published in dramatic form. During this time, she was also writing novels and other works.
Maighread now has seven published collections and a non-fiction work, Savage Solitude, which is a scholarly, dramatised study of the lone state, published by Dedalus Press in April 2013. Her most recent book, Parvit of Agelast, a verse fantasy, was shortlisted for the Pigott Poetry Prize in 2017. She's currently pursuing a creative PhD in DCU.

Reviews of The Coal-black Sea by Maighread Medbh

You have subscribed to Smashwords Alerts new release notifications for Maighread Medbh.

You have been added to Maighread Medbh's favorite list.

You can also sign-up to receive email notifications whenever Maighread Medbh releases a new book.