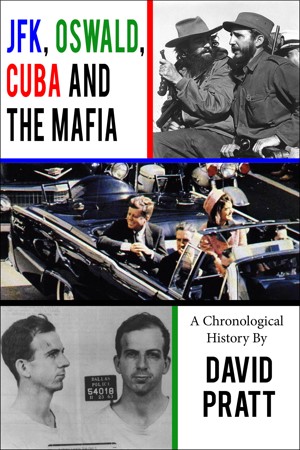 JFK, Oswald, Cuba, and the Mafia

By David Pratt
In his years of research on the assassination of John F. Kennedy, David Pratt, a respected scholar, noticed a gap in the literature: the absence of a work that simply presents the evidence and allows readers to judge. This book fills that gap by offering a timeline of firmly established evidence. No theories or conspiracies. But the evidence does not support the Warren Commission verdict. More
David Pratt, a scholar with little taste for conspiracy theories, read the Warren Commission Report on the John F. Kennedy assassination and assumed that the facts had been examined thoroughly, and that its conclusion, that Lee Harvey Oswald acted alone, was unimpeachable.
His first doubt surfaced when he encountered Bertrand Russell’s essay,16 Questions about the Assassination in 1967. Pratt began scouring many of the hundreds of books on the topic, but they raised myriad questions.
Who shot President Kennedy? Did Oswald act alone or as one of a group? Was he, as he claimed, a “patsy”? What was the role of organized crime? How did Jack Ruby manage the split-second timing that allowed him to kill Oswald? How to explain the many witnesses who died sudden and violent deaths in the aftermath of the tragedy? How trustworthy were the two government commissions, the Warren Commission of 1964 and the House Commission of 1978?
As Pratt delved into the records, he noticed a gap in the literature: the absence of a work that simply presents the evidence and allows readers to make up their own minds. This short e-book fills that gap. It is a timeline of events, presenting only firmly established factual evidence right up to the present. His brief commentary appears at end. The truth may remain elusive, but the reader will be equipped with evidence to form a judgment.
Available ebook formats: epub mobi pdf rtf lrf pdb txt html
First 10% Sample: epub mobi (Kindle) lrf more Online Reader
pdb
Price: $2.99 USD
Buy Add to Library Give as a Gift
How gifting works
Create Widget
Tags: cuba conspiracy john f kennedy jfk lee harvey oswald fidel castro the mafia warren commission kennedy assasination che guevera
About David Pratt

David Pratt has been collecting quotations since his youth. His book, The Impossible Takes Longer: The 1,000 Wisest Things Ever Said by Nobel Prize Laureates is published by Walker/Bloomsbury in the US, Profile Books in England, and is translated into several other languages.

Pratt is Professor Emeritus, Queen’s University, Canada. He was educated at Oxford, Harvard, and Toronto. He lives in Kingston, Ontario, Canada.

Reviews of JFK, Oswald, Cuba, and the Mafia by David Pratt