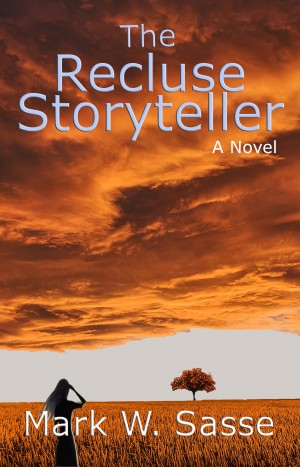 By Mark W Sasse
The Recluse Storyteller weaves five stories into one as the loner Margaret not only searches for meaning from her reclusive life, but also gives meaning in the most unexpected ways to the troubled souls of her apartment complex. Part adventure, part tragedy, and part discovery, The Recluse Storyteller bridges genres, bringing hope and redemption to the broken relationships of modern society. More
Red Hat hijacks a yoghurt truck and barrels into the Chester Walz Bank at full speed, desperate to open a safety deposit box.

The twins, beckoned by an ominous streak of light across the sky, climb Harper’s Hill to encounter an apparition of their missing father.

The reverend stands on a muddy ridge, the barrel of the rifle in his neck, looking down on a Vietnamese village, scarred by war and regret.

The stories come to Margaret at all times, but they are anything but random. A fractured view of Michael Cheevers’ red hat through a discreetly cracked door sends her off on adventure. A glimpse of the Johnson twins from apartment 2D takes her to the lonely hill on a Midwestern prairie in 1887. The regular letters from Reverend Davies, who has tried to look after Margaret since the death of her mother, brings her to the brink of exhaustion, staring intensely into the heart of war deep in the jungle of Vietnam.

Margaret is not insane, at least not in a clinical sense. She’s like a midnight raccoon, painfully aware of her surroundings, gleaming crumbs of information at every turn; eyes peering incessantly in the night, stealing glances of neighbors behind partially opened doors.

But the tales that she weaves were not meant to merely hold empty court to the receptive dead air of her apartment. Her stories were meant to embolden the lives of the inhabitants of that drab apartment block because her story is also their story—and everything would be different if they could only hear her stories.

The Recluse Storyteller weaves five stories into one as the loner Margaret not only searches for meaning from her reclusive life, but also gives meaning in the most unexpected ways to the troubled souls of her apartment complex. Part adventure, part tragedy, and part discovery, The Recluse Storyteller bridges genres, bringing hope, life, and redemption to the broken relationships of modern society.
Available ebook formats: epub
Price: $0.99 USD
Buy Add to Library Give as a Gift
How gifting works
Create Widget
Tags: fiction historical fiction womens fiction vietnam literary fiction contemporary fiction
About Mark W Sasse

Mark W Sasse is a novelist and award-winning playwright and director. He vacillates on a daily basis between which genre of writing he enjoys the most. Luckily, he doesn’t have to choose! Sasse’s novels have been featured on curated sites such as Bookbub and Noisetrade, and his plays have been produced in New York, Penang, Kuala Lumpur, and Sydney, Australia. He was the winner of the Greywood Arts Winter Residency 2018 for his play "The Last Bastion." He is a three-time winner of the Best Script Award at the Penang Short & Sweet Theatre Festival. His plays have won multiple other awards such as Best Overall Performance and Audience Choice Award. He won the Festival Director’s Award at the 2016 festival.

Sasse’s interests cast a wide net – from politics to literature – from culture and language – from history and religion, making his writing infused with the unexpected as he seeks to tell authentic and engaging stories about people from all walks of life. His writing is straightforward and accessible to all, especially those who enjoy a page-turning good story injected with doses of Asian culture, history, adventure, and unexpected humor.

His first novel series - THE FORGOTTEN CHILD TRILOGY - is finished. Book 1 - A MAN TOO OLD FOR A PLACE TOO FAR - published in December 2017 with book 2 - THE AFRICAN CONNECTION - published in July 2018. Look for book 3 sometime in early 2019. This adventure novel series dabbles in the fantastical with a little magical realism, history, and time travel thrown in alongside the requisite human stories.

As for his plays, he’s fond of both the short play (10 minutes or less) and full-length formats. From 2011-2017 he wrote and directed the drama ensemble The RLT Players, a passionate group of dramatic storytellers who specialize in the short play format. In September 2016, his experimental theatre piece “How to Build a Dictator” was featured as part of Penangpac’s Black Box Experiments series. In January 2017, his new play “The Last Bastion” was featured in a staged-reading in collaboration with the Penang Performing Arts Centre. His goal is to have it go into full production somewhere in the world. Any takers?

HOW DID HE FINALLY GET HIMSELF WRITING?

Sasse remembers writing his first play when he was about thirteen. It was about Queen Esther and the only person he ever showed that play to was his mother. In college, he wrote lots of poetry, even love poetry for a certain girl. But once he graduated, his writing confidence was shattered, so he gave it up for the next twenty years. He doesn’t recommend doing that! He went to China to teach English in 1992 and eventually moved to Vietnam to do the same in 1994, shortly after the U.S. lifted the embargo against their former enemy. He lived in the exotic Vietnamese culture with his family for nearly ten years. After many life-changing experiences there, Sasse’s new-found taste for history sent him back to school to pick-up a second Master’s degree, this one in Humanities. This led to a shift from teaching English to history as he moved to Malaysia in 2006. Little did he know, however, that all of this was building up to another major shift, which would get him back to writing.

On a whim in 2007, he embarked on a collaborative project with a group of students to write and produce a play, resulting in the original stage play “Monkey Love Potion.” It was such a fun and rewarding experience that he decided to try it again the following year. Before he knew it, he was hooked and that was the beginning of his love affair with live theatre. After writing and successfully producing four original full-length scripts, he finally got the nerve to try his hand once again at a hidden desire which had defeated him many times over the years – novel writing.

In the summer of 2011, he embarked on the journey of writing his first novel. His greatest worry was reaching the magical 50,000 word mark, so he could officially call himself a novelist. When the story, “Beauty Rising,” clocked in at over 60,000 words, he was shocked and happy. But not content. He didn’t know what to do with the novel, and he convinced himself that it would sit idle until he wrote a second novel. He hated hearing the words “one-hit wonder” echo in his head. So in the summer of 2012, he wrote “The Recluse Storyteller.”

Feeling a little more confident, he decided to focus on exposing his work to the public in order to receive some feedback. In December 2012, he independently published “Beauty Rising.” When the first review from an online book reviewer was posted and it was over-the-top positive, he was flying high, and if he never wrote another word in his life, he would have been content. But that contentment was not to be. He was now hopelessly hooked on both playwriting and novel writing, and he hasn’t looked back since.

He has published seven novels with eight on the way and nine in the planning stages. He is grateful for all the readers who have joined him on this journey of creativity.

ON A PERSONAL NOTE

Sasse loves to cook everything from pizza to Thai. He’s coached softball or baseball for the past ten years, and he’s been a much too loyal fan of the Pittsburgh Pirates since he was 9 years old—another item he’s hopelessly hooked on. He enjoys travelling, visiting historical sites, and sitting by the beach or other scenic spot with a laptop, an idea, and a lot of time. He has a lovely wife and three wonderful children and one really cool son-in-law – he’s Korean, keeping with the Asian theme of his life. He has an active blog (www.mwsasse.com) where he writes frequently about history, writing, culture, and life. He loves to hear from readers, so he hopes you’ll stop by his site and say “hello.”

The Complete List of Published Works by Mark W Sasse

Reviews of The Recluse Storyteller by Mark W Sasse

You have subscribed to alerts for Mark W Sasse.

You have been added to Mark W Sasse's favorite list.

You can also sign-up to receive email notifications whenever Mark W Sasse releases a new book.