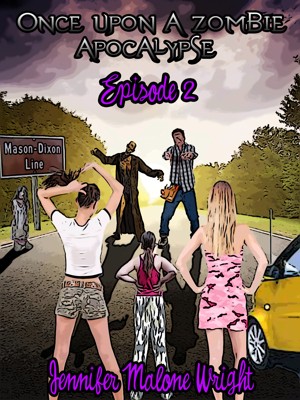 Once Upon a Zombie Apocalypse: Episode 2

The virus, which is turning the world’s population into zombies, is spreading faster than either of them would have imagined. Chaos now plagues what is left of society, leaving death and destruction rioting in the streets. Many of the survivors have gone into hiding in order to stay alive.

Jennifer Malone Wright is best known for her short story series, The Vampire Hunter's Daughter. Other works include the follow up to The Vampire Hunter's Daughter series called The Arcadia Falls Chronicles, Savior (A Higher Collective Novel) and the Graveyard Guardians series. Jennifer also co-authors a series called Once Upon A Zombie Apocalypse.

She resides in the beautiful mountains of northern Idaho with her husband and five children where she practices preparing for the zombie apocalypse. Just kidding!

But seriously, between the craziness of taking care of her children, Jennifer has little time left for herself. The time she does have left, usually leading far into the night, is spent working on her beloved fiction or chatting with her equally crazy friends.

Jennifer also loves coffee, has a passionate affair with red bull, wishes the sushi were better where she lives and dances while she cleans. 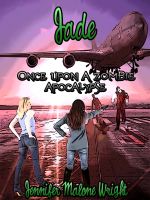 Also in Series: Once Upon A Zombie Apocalypse Novellas

Reviews of Once Upon a Zombie Apocalypse: Episode 2 by Jennifer Malone Wright

I was BLESSED with an ARC for my honest review. This is for mature audiences only and I'll tell you why....I read this before bed and OMG I swear I was scared to fall asleep! I kid you not! I kept "hearing" z-bags outside my window. My husband was mad. But anyways.....I absolutely LOVED IT!!!! The tough girl Jade shows she can face it all but you also get to know the soft side of her and like a book boyfriend....Jade is my "book bestie". I adore her! It's all thanks to Jennifer Malone Wright who wrote this amazing character for everyone to care for and cheer on. I am so loving this episode and can't wait to read more with Kylee next :-D.

I just LOVE this series!!!! The author know's what her readers want....and she blew this Episode out of the water!! It's funny with a little bit of reality thrown in there. I do know this....If our world ever came to this, I would know who to go to!! LOL I recommend this series to just about everyone...There is some adult language but other then that EVERYONE should read this series!!!!

You have subscribed to alerts for Jennifer Malone Wright.

You have been added to Jennifer Malone Wright's favorite list.

You can also sign-up to receive email notifications whenever Jennifer Malone Wright releases a new book.