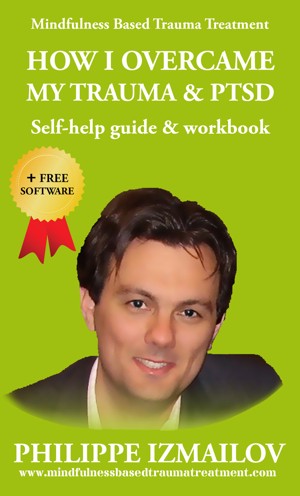 By Philippe Izmailov
Want to know How I Overcame my Trauma & PTSD? Read my workbook and Discover:

* How your traumatic memories are stored in your brain
* How to become free from your haunting memories
* How to neutralize your past trauma
* How to reprogram your troubling flashbacks
* How to access to your subconscious traumatic memory
* How to relieve yourself from your nasty emotions More
Are you haunted by awful memories of your past?

Two years ago I was diagnosed with depression and Posttraumatic Stress Disorder (PTSD). I suffered from anxiety, different fears, nasty feelings (especially sadness and anger), flashbacks and re-experiencing my traumas. I also used to experience plenty of stress, irritability, feelings of guilt, memory problems, sleeping problems and changes in mood. I tried to avoid these nasty experiences and to forget my bad memories but it did not help. My efforts were in vain.
My traumas were caused by different traumatic events with were full of violence, physical and emotional abuse, aggression, emotional blackmail, bullying and mobbing (pestering). Most of these events happened during my childhood. For some time I have been treated by a psychologist, who applied several cures like Cognitive Behavioral Therapy and Eye Movement Desensitization and Reprocessing (EMDR). As I was not satisfied with my progress, I developed and employed a successful self-help treatment to recover from psychological traumas and PTSD. I named it Mindfulness Based Trauma Treatment (MBTT). In my self-help workbook I describe step by step my treatment method based on the experiences with my own traumas. Mindfulness Based Trauma Treatment (MBTT) consists of elements from Mindfulness, Neuro-Linguistic Programming (NLP), Buddhism and Psychology.
I have succeeded in healing more than 100 different traumas using MBTT. I’m changed. I do not suffer from anxiety, fears, nasty feelings, flashbacks and other things any more. They’re all gone. I can recall my traumas without experiencing nasty emotions, fears and stress. They do not bother me anymore. Now I’m able to experience positive feelings again, such as happiness and love.

Want to know How I Overcame my Trauma & PTSD? Read my workbook and Discover:

Check Out What Others Are Saying...

“The method of the self-help treatment has been clearly described in the book, as a result of which everybody with a trauma, can get to work with this! “Anke S.

“This method can be very useful for someone, who, like the author, is looking for a way out of the swamp filled with traumatic memories.” Ulrike B.

“Philippe, You're the one with all that writing talent- I barely had a choice I was that caught up in the book, so inspiring! Your book gave me a positive outlook on things and instead of preaching about letting go about events- which I often find- it actually advises you instead. This is quite unique and different from anything I have ever come across. So inspirational and is something I would recommend to any of my close relations. Thank you!“ Atisha

Do you want to reveal ALL SECRETS behind my trauma recovery?

Philippe Izmailov is an author, NLP practitioner, computer programmer, economist and teacher. He was born in Russia where he spent his childhood, which was frequently influenced by severe traumatic experiences, together with his single mother, who suffered from mental disorders. He did have a terrible youth, characterized by a lot of aggression, violence, blackmail, bullying and emotional abuse, mostly caused by his mother. In 2001 he came to the Netherlands. There his life started all over again. He resumed studying. After having graduated in Computer Programming and Finance, he went to England to study the English language. Being there, he spent some time meditating at a local Buddhist meditation center in Brighton. At Cambridge he got acquainted with Neuro-Linguistic Programming (NLP). After his return to the Netherlands, he studied NLP with The First Lady of NLP, Anne Linden, in Belgium. In 2010 Philippe got struck by a severe illness. He was being diagnosed with Posttraumatic Stress Disorder (PTSD) and he consequently became very heavily depressive, caused by his deeply rooted psychological traumas. Philippe had always been utterly interested in the functioning and backgrounds of the human mind and psyche. He applies his knowledge to develop a self-help method, which he defines as Mindfulness Based Trauma Treatment, and which he successfully employs for his own benefit by dealing with the effects of his psychological traumas. Read Philippe's blog.

You have subscribed to Smashwords Alerts new release notifications for Philippe Izmailov.

You have been added to Philippe Izmailov's favorite list.

You can also sign-up to receive email notifications whenever Philippe Izmailov releases a new book.