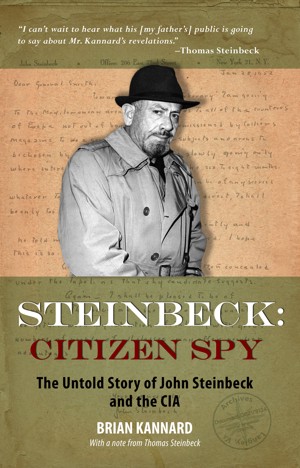 Discovered by author Brian Kannard, these letters create the tantalizing proposal that John Steinbeck was, in fact, a CIA spy. Utilizing information from Steinbeck’s FBI file, John’s own correspondence, and interviews with John’s son Thomas Steinbeck, playwright Edward Albee, a former CIA intelligence officer, and others, Steinbeck: Citizen Spy uncovers the secret life of American cultural icon and Nobel Prize–winner, John Steinbeck.
•Why did the FBI admit to destroying elements of Steinbeck’s FBI file when it is accessible through their “FOIA Vault” website?
•Did Steinbeck actively gather information for the intelligence community during his 1947 and 1963 trips to the Soviet Union?

•Why was the controversial author of The Grapes of Wrath never called before the House Select Committee on Un-American Activities, despite alleged ties to Communist organizations?

•Did the CIA influence Steinbeck to produce Cold War propaganda as part of Operation MOCKINGBIRD?

•Why did the CIA admit to the Church Committee in 1975 that Steinbeck was a subject of their illegal mail-opening program known as HTLINGUAL?

These and a host of other resources leave little doubt that there are depths yet unplumbed in the life of one of America’s most treasured authors. Just how heavily was Steinbeck involved in CIA operations? What did he know? And how much did he sacrifice for his country? Steinbeck: Citizen Spy brings us one step closer to the truth. This text includes a note in the introduction from Thomas Steinbeck.
Available ebook formats: epub mobi lrf pdb html
First 12% Sample: mobi (Kindle) lrf pdb Online Reader
Price: $5.99 USD
Buy Add to Library Give as a Gift
How gifting works
Create Widget
Tags: fbi cia espionage intelligence spy brian kannard foia freedom of information act grave distractions publications john steinbeck intelligence community intelligence history diego rivera burgess meredith chase horton citizen spy e howard hunt paulette goddard thomas steinbeck walter bedell smith william colby
About Brian Kannard

After pursuing a degree in Finance and Economics at David Lipscomb University, Brian ran small business concerns for three years and entered the world of corporate management in 1998 for an eleven year tour. In 2009 Brian left his management career to finish his first book, Skullduggery: 45 True Tales of Disturbing the Dead, and in early 2010 opened the independent publishing house Grave Distractions Publications. Grave Distractions has published 70 books for 22 different authors; including works from Dead Sea Scrolls scholar Dr. Robert Eisenman and American History Professor Dr. James T. Baker of Western Kentucky University. Brian also does freelance writing and his articles have been featured in such places as: Armchair General Magazine, CNN, Coast to Coast AM, Psychic Oracle Magazine, Red Ice Creations, Yahoo News, and Unexplained Mysteries. In 2013, Brian's second book, Steinbeck: Citizen Spy, was published and examines a previously unknown relationship between The Grapes of Wrath author, John Steinbeck, and the CIA.

Brian is also a Freemason and writes, infrequently now, the esoteric themed blog, Grail Seekers. Assisting Brian in his work is his lovely wife Laura, son Robert, and unholy black cat Preacher. Currently, Brian is considering a number of projects delving into historicalmysteries.

You have subscribed to alerts for Brian Kannard.

You have been added to Brian Kannard's favorite list.

You can also sign-up to receive email notifications whenever Brian Kannard releases a new book.