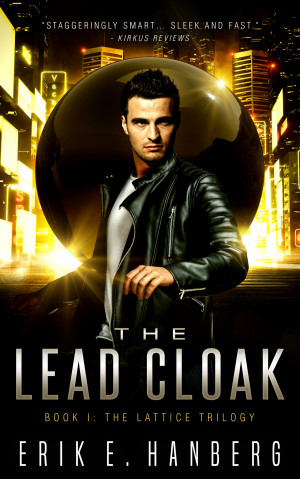 Nevada, 2081. Colonel Byron Shaw safeguards the world’s innermost secrets. From a control center in Area 51, he monitors the expansive surveillance system that once saved him certain death at the hands of ruthless kidnappers. But not everyone trusts technology that peers through strangers’ eyes, so it’s no shock when a guerrilla attack nearly wipes out the network and spills his blood.

Tasked with tracking down the terrorist cell, Byron sets off on a globe-spanning chase that brings him to the outer edge of Earth’s atmosphere. But as he infiltrates their ranks, a growing suspicion about the system that preserved his own life could sabotage civilization.

Torn between duty and doubt, one man’s decision could rewire humanity’s future.

About the Series: The Lattice Trilogy

Byron Shaw can track and find anyone on Earth. Except the people who tried to kill him.

By 2081, privacy no longer exists. The Lattice enables anyone to re-live any moment of your life. People can experience past and present events—or see into the mind of anyone, living or dead.

Most people love it. Some want to destroy it.

Colonel Byron Shaw has just saved the Lattice from the most dangerous attack in its history. Now he must find those responsible. But there’s a question nobody’s asking: does the Lattice deserve to be saved?

The answer may cost him his life.

Also in Series: The Lattice Trilogy

Reviews of The Lead Cloak by Erik E. Hanberg

I'm thinking that The Lattice is really a symbol for the internet and the absolute lack of privacy it generates. Glad to see that, we need that warning, but as I've said a million times, no one takes anything we sci-fi writers do as a warning, they take it as a prediction, often of something so inevitable they sleep walk right into it. This was written before or during 2013, before the REAL danger of the internet was anywhere near as apparent as it is today. That danger is, of course, misinformation and disinformation. He correctly points out that America cannot survive with the internet, social media, etc., as it is now. We are right in the middle of observing how only nations that control the information available to their citizens will survive, nations that allow lies and fantasy to be passed off as fact will watch their democracy pass out of existence in the next few years.

As far as the story itself, not bad at all. Not too much violence, a fair helping of suspense, a few twists and turns, a few narrow escapes. The main character is married and and another couple are boyfriend/girlfriend so it's not as neutered as the average free sci-fi, but you aren't present for any actual sex.

Now the science behind the invention that this whole story was about isn't really the point, in my opinion. Of course there is absolutely no theory how such a thing might work other than a vague 'entanglement' claim. I don't think it matters, I think the message about privacy is the point and not how to actually invent such a monstrous thing.

I've giving this four stars because of the thought regarding what total lack of privacy would do to society. I don't agree with his conclusions completely, in my opinion what lack of privacy he talks of is the lack of privacy we get from our phones and the internet. Phones are already addicting our young people to the point where they have difficulty functioning in real-world social situations. I think something like the lattice would either cause mass suicides or world wide riots, but I've been wrong in the past about things like that.

You have subscribed to Smashwords Alerts new release notifications for Erik E. Hanberg.

You have been added to Erik E. Hanberg's favorite list.

You can also sign-up to receive email notifications whenever Erik E. Hanberg releases a new book.