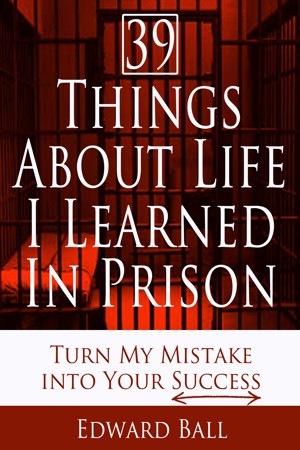 39 Things About Life I Learned in Prison: Turn My Mistake into Your Success

The title of this book describes exactly what it is about. The author went to prison at a young age so he had no choice but to learn about life on the inside. He outlines some of the things he learned in prison using real life stories so you understand how he came to learn the particular lesson he writes about. This book is a message of personal development and extracting value from our mistakes. More
During our lives we will make mistakes. If we fail to learn from those errors then they were for nothing. Edward Ball went to prison for 14 years and learned many lessons from one big mistake. He shares those lessons using personal anecdotes about other prisoners and his real life experiences. He tells stories about incidents that occurred in prison that gave him the opportunity to learn about life. He met a man with super human strength who was starved by correctional officer; from this event Edward Ball learned that life doesn't always test our strengths… it often tests our weaknesses. This isn't another book about prison. It is a book about personal development, learning, making the most out of where you are in life and a book about motivation. 39 things about life I learned in prison demonstrates that anyone can improve themselves, anyone can learn and that opportunities exist in every environment. This book has real life, real lessons and real action steps.

Edward Ball is a new author who writes to help people become better. His first title, 39 Things About Life I Learned in Prison: Turn my Mistake into Your Success, is about personal development. He believes if he can be better and do better anyone can and anyone who reads his books and knows his story will be motivated to become the best they can be.

Edward Ball is the founder of Ball Team Enterprise LLC. He founded this company to help people extract lessons from their mistakes and the mistakes of others and use those lessons as personal and professional development tools. Through his eBooks and other informational material he aims to help people be the best they can be. He spent the last 14 years in prison and is an expert on making mistakes. After being sentenced to nearly 40 years in prison Mr. Ball earned two Bachelor’s degrees, one in Liberal Arts-Human Interaction from Indiana State University and one in Organizational Management from Grace College. He extends the following offer to anyone with the ability and willingness to learn: Be better, do better…come learn with us, Ball Team Enterprise.

Anything is possible! Edward Ball was released from prison in May of 2013, started a business in July of the same year and published a book in September of 2013.

You have subscribed to alerts for Edward Ball.

You have been added to Edward Ball's favorite list.

You can also sign-up to receive email notifications whenever Edward Ball releases a new book.