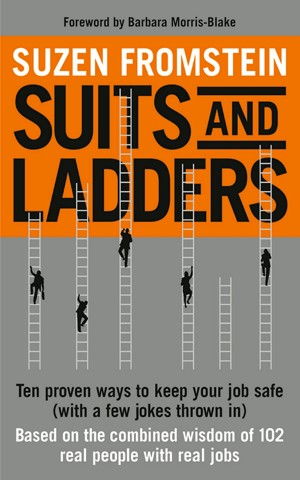 By Suzen Fromstein
Protect Yourself – and Your Job. A one-of-a-kind corporate survival guide based on the combined wisdom of 102 people with real jobs

Suzen Fromstein has created the ultimate corporate survival guide for any person starting out or in transition. The survival strategies identified in Suits and Ladders: Ten Proven Ways to Keep Your Job Safe (with a few jokes thrown in) are universal and transcend national borders, industries and genders.

These are the same strategies 102 real people with real jobs use to keep their corporate jobs safe. Following their lead gives you a better chance of survival, or at least, gives you a fighting chance at survival. Whether you work in Canada or France, in financial services or for a not-for-profit there are ten things you can do right now to stabilize your cash flow, improve your professional outcomes and keep your job safe.

In her foreword, Barbara Morris-Blake who has interviewed and coached over 10,000 junior-to-senior level people over the past twenty years and whose articles on leadership development and personal effectiveness frequently appear in the media says, “Although there are many credible business books on corporate survival, I have not come across a book quite like Suits and Ladders…(it) is the exit interview and the corporate survival coach you wish you had.”

You will discover:
• Your boss’s career is the only thing that really matters.
• What you learned yesterday may not apply to today.
• What you say and do, can and will be used against you.
• Real people are far more interesting than the voices in your head.

Advance Praise for Suits and Ladders
“Suzen has tapped into what certainly qualifies as one of the most troublesome issues faced by many individuals today: hanging on to a job. She has formulated a survival guide with clearly written pragmatic actionable concepts but implicit in her text is a belief of continued learning with some healthy laughing along the way.”~ Al Emid, Radio & News Magazine Producer, Financial Journalist and Canadian Best-Selling Co-Author of What I Have Learned So Far and Financial Recovery in a Fragile World (and upcoming release Investing in Frontier Markets: Opportunity, Risk and Role in an Investment Portfolio)

“Every sentence of this book offers sage suggestions for keeping your job safe and yourself protected. From heightening self-awareness to championing a positive attitude and fuelling your workplace passion, Suzen has thrown enough seeds on the soil to grow a whole new crop of quality, secure and forward thinking professionals. The bonus? This volume is transferable to private life and personal relationships, too!”~ Nina Spencer, International Keynote Speaker and Canadian Best-Selling Author of Getting Passion Out of Your Profession (and 2014 release of A Time to Creep, A Time to Soar: Lessons learned for work and life from climbing Kilimanjaro)

“The way Fromstein presents her pertinent and significant ideas in Suits and Ladders is exemplary. She combines essential information with real life case studies to create a comprehensive, easily understood guide. Suits and Ladders is a perfect handbook for all employees and an essential manual for University and College grads."~ Zel Spillman, A1 Career Coach.com, executive search, Co-op Consultant, Masters Accounting, University of Toronto, Canada

Meet Suzen Fromstein
Suits and Ladders: Ten Proven Ways to Keep Your Job Safe (with a few jokes thrown in) is Suzen Fromstein’s debut Kindle e-book and was inspired by her inability to hold onto a job. Her second e-book: Inform, Influence and Entertain Like a Pro, The Seven Deadly Sins of Public Speaking will be available shortly.

She swears that Killers, Coffins & Cadavers, a humorous guide to death and dying co-authored with standup comic Michael Nemiroff and comedic actress Elaine Smookler. will be published at some point - whether in this lifetime or the next remains to be seen.

Suzen Fromstein APR made her debut as a published author with SUITS AND LADDERS: Ten Proven Ways to Keep Your Job Safe (with a few jokes thrown in). Suits and Ladders was an Amazon Best Selling Book (Career and Career Guides) on date of issue, and consolidates the combined wisdom of 102 real people with real jobs. Following their advice gives employees (regardless of industry or sector) a better chance of survival, or at least, gives them a fighting chance at survival.

Her second book, "WANT TO INFORM, INFLUENCE AND ENTERTAIN LIKE A PRO? Simply Recognize The Seven Deadly Sins of Public Speaking And Then Avoid Them" summarizes Suzen's experience on both sides of the podium. It also contains a bonus section on how to add humor to everything co-authored with stand-up comic Mike Nemiroff.

Suzen and Mike collaborated again on her most recent third book, "THE GRIN REAPER - A Humorous Look at Death & Dying (with a few jokes thrown in). Suzen developed an interest in death the first time one of her jokes killed in a Toastmasters Humorous Speech Contest. Thoughts of death continued to flow freely as she pursued work in the corporate world where she specializes in the deathly-difficult task of turning corporate monologue into engaging consumer dialogue. Suzen continues to kill as a published author, a marketing content creator, freelance writer and speechwriter.

Suzen is also currently co-authoring "A CONVENIENT RUSE" a murder mystery, with her colleague Tim Stoate.

Reviews of Suits And Ladders by Suzen Fromstein

You have subscribed to alerts for Suzen Fromstein.

You have been added to Suzen Fromstein's favorite list.

You can also sign-up to receive email notifications whenever Suzen Fromstein releases a new book.