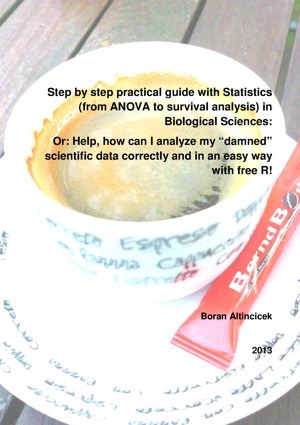 Step by step practical guide with Statistics (from ANOVA to survival analysis) in Biological Sciences: Or: Help, how can I analyze my “damned” scientific data correctly and in an easy way with free R!

To use this book the reader does not need to be an expert in statistics. Just copy and paste the syntax of commands and apply them on your own specific data set. The secret in understanding statistics is to perform multiple analyses on diverse data sets to get a better knowledge of the different models.

What’s inside?
You will find a book introducing into scientific researching with practical step by step examples in data analysis and in visualizing data using R.

Dr. rer. nat. habil. Boran Altincicek has been graduated from the University of Gießen in Germany. During preparing his Ph.D. thesis in Biology, he and his colleagues co-founded a biotech research spin-off company (Jomaa Pharmaka GmbH). Multidisciplinary research in host-pathogen-interactions and immunology, writing of patents and scientific publications were part of his work. After two years as Post-doc at the Institute of Biochemistry in Gießen, he took the opportunity to lead a research group and to investigate molecular adaptation of diverse insects to pathogens and the phenotypic plasticity and evolution of the insect immunity at the Institute of Phytopathology and Applied Zoology. Self-dependent teaching, own third-party funding, and numerous publications in international scientific journals resulted in his German “Habilitation” in the year 2009. Then, funded by the German Research Foundation-DFG with the Heisenberg fellowship in Zoology, he got the opportunity to work on insect ecology and evolution as a Visiting Scientist and Lecturer with Professor Nicole Gerardo at the Emory University in Atlanta, GA, USA. Prior to his current working as freelancer and consultant in Lilongwe Malawi (Africa) he was “Privatdozent” (equivalent to Assoc. Professor) in Zoology and Ecology at the Agricultural Faculty of the University of Bonn, Germany.

You have subscribed to alerts for Boran Altincicek.

You have been added to Boran Altincicek's favorite list.

You can also sign-up to receive email notifications whenever Boran Altincicek releases a new book.