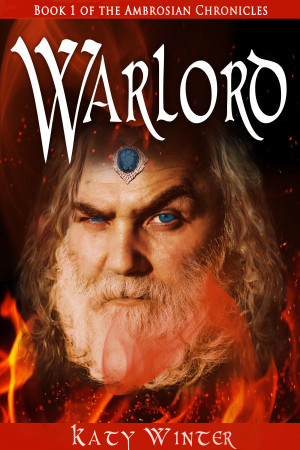 Having graduated from university, Katy Winter qualified as a teacher. Much of her subsequent career was spent teaching English Literature and History. She also taught night classes of tertiary students Classical Studies – the study of ancient Greek and Roman History, Art, and Literature. This love of the Ancient world was the spring-board which prompted her to turn her attention from teaching to writing. Katy spent nearly two years creating her epic work, the seven book “Ambrosian Chronicles”, publishing them between 2013 and 2015. They were followed by “Jepaul” (2017), “Sephone” (2018), and most recently "Sopho" in October 2020.

Also in Series: The Ambrosian Chronicles

I loved the book I found the male slave abuse disturbing but it didn't distract from the story. Definitely going to read the rest of the series.

There's nothing better than a doorstep epic fantasy novel that kicks off a seven-volume series. You know there's going to be plenty to get your teeth into. This was a long book so there was plenty of space for the plot and characterisation to unfold quite naturally. It had a very easy style, which I liked very much.

The writing was very strong. I also enjoyed the vibrancy of the universe. There was alot of back detail and it made the whole experience of reading it vivid and realistic. Fantasy novels depend on that to help the reader leap into the invented world, and this was achieved very successfully here, as well as setting a successful foundation for the remaining books in the sequence.

I was looking for a new fantasy series that I could get seriously involved with. Having noted that the Ambrosian Chronicles goes to seven parts, I downloaded this first part "Warlord".
The first section of the book involves a thorough introduction to Katy Winters world and then draws you in to the story with fascinating character development and storyline. I am hooked. Recommended for those who enjoy wonderful word craft as well as a ripping fantasy yarn. I am looking forward to the rest of the series.

It's common for reviews of fantasy fiction to draw comparisons with Tolkein. I'm not going to do that. There are no hobbits, no elves, no dwarfs, and certainly no orcs, so such a comparison would be invalid. In fact, if your taste in fantasy or science fiction writing is rooted in the "sword and sorcery" sub-genre, then this book probably isn't for you. Yes, there are mages, but no magic - at least not magic as most people would understand the term. In "Warlord" the author paints a vivid picture of another reality, where a few gifted individuals employ the power of their minds in a life or death struggle with the evil that threatens their world of Ambros. If I were to classify the book - a difficult task - I would call it "social science fiction".

Katy Winter has written a well-crafted, fast-paced, original work. Violent at times, the narrative builds a picture in the mind, letting the reader's imagination take over. "Warlord" therefore owes more to Alfred Hitchcock's thrillers than to the explicit violence of George R.R. Martin's "Game of Thrones" and the like. Which brings me to the warlord himself.

The author has added a new name to the register of fictional evil protagonists. The warlord Lodestok is a profoundly evil individual, quite unlike any other I have come across. Though not the paramount source of evil in the book, he is the conduit through which evil works. There is an extensive cast of characters, but Lodestok, more than any other, is central to the plot. A truly bad individual, he both fascinates and repels. Were "The Ambrosian Chronicles" to be adapted for film or television, actors would be lining up to play him.

"Warlord" is only the beginning of a saga which encompasses seven volumes, all of which have now been published. Having now read all seven books, I can honestly say the story is worth the time spent in following it to the very end. I hope we will see more from this new, talented writer.