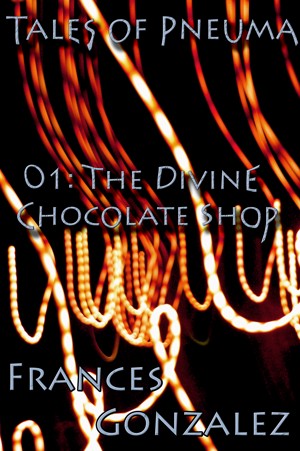 Reviews of Tales of Pneuma 01: The Divine Chocolate Shop by Frances Gonzalez

Tales of Pneuma is off to a promising start.

In this first story, "The Divine Chocolate Shop", main character, Liam, wants to investigate the deaths of his parents. During his investigation, he ends up working at a rather bizarre chocolate shop. His employment will bring him to the very fringes of reality, to the smudged line between life, death, and alternate universes.

Written in present tense, the writing style is quite literary with highly descriptive prose, and unusually striking images. I often find literary fiction tedious to read, but in this case the author manages to tread the fine line and produce well-planned prose without neglecting the plot.

The story is set in modern times, with a hint of the surreal. The fantasy elements are unusual and imaginative (such as chocolates that contain human emotions), which is refreshing.

While Tales of Pneuma is an ongoing short story collection, with each story being self-contained, there is an overarching plot which ties everything neatly together. Thus Tales of Pneuma will appeal to both short story and serial lovers alike. I'd recommend checking out other stories in the series.

You have subscribed to alerts for Frances Gonzalez.

You have been added to Frances Gonzalez's favorite list.

You can also sign-up to receive email notifications whenever Frances Gonzalez releases a new book.