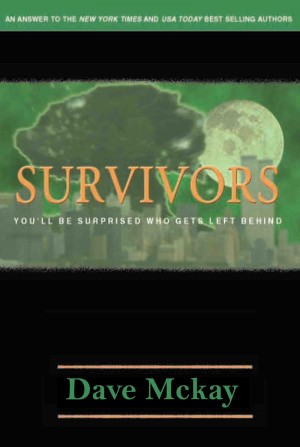 It is the darkest days in the history of the planet.
Decadence and disasters threaten to destroy the world. But a handful of faithful believers become the leaders of a mighty worldwide revolution of faith and love that shocks the world. This novel, based on actual prophecies from the Bible, will do more than entertain, more than shock, and even more than inspire. It will give you practical information to prepare you for what lies ahead in world affairs.
Be prepared to be deeply disturbed by what it says.

This book is NOT a part of the “Left Behind” series by Tim LaHaye and Jerry Jenkins.

It is, however, an attempt to address certain issues which we feel were left out, contradicted, or mis-interpreted in that series.

Also in Series: The Survivors Trilogy

Reviews of Survivors by Dave Mckay

Timeless thought provoking lessons that are revelant now, and in the future!

The book is so relevant to what is happening at the moment and it just makes a lot of sense. The opening scene gets you hooked straight away!

Very punchy. Bible prophecy is a subject that´s always interested me, but it´s hard to understand. This book gives a very real and pertinent perspective on how prophecy is relevant to modern day life. Kind of a spooky read, especially if you are from the U.S.!

In the beginning, I thought the book was quite good, but now, the pilot (what was his name?) just met that German guy with the leaflet in London.

And really, that scene is badly written because it's almost impossible to read all that gobbledigook in that "strong German accent". I also find it offensive.

It's not is if German people couldn't speak proper English, and I really don't need to read such a ridiculous scene in a book by an author who probably speaks only ONE language, English, and assumes anyone else who learns a foreign language can only be barely intelligible.

Well, I'll now read the rest of the book. Maybe. But I definitely don't agree with all these five-star ratings.

Just reiterating from the initial blurb about "Survivors"... McKay has given us A LOT of practical advice in it before the difficult times come, preparing us in many different ways, both physically and spiritually.

This has to be one of the best novels on End times I have EVER read!

Got me thinking (which can't be a bad thing!) :) Very Inspiring too.

(review of free book)
HarmonicTonic reviewed on May 12, 2014

Fantastic read. Suspense, drama, highly informative, but above all it contains so much truth.

(review of free book)
GregorianChant reviewed on May 12, 2014

I couldn't put this one down.

I started in the middle of the trilogy (listening) so it's interesting to read this book now and get some of the back story on Rayford.

Again, you've managed to throw together characters from very different backgrounds and show how they csn work together despite those differences.


Keep up the good work!

You have subscribed to alerts for Dave Mckay.

You have been added to Dave Mckay's favorite list.

You can also sign-up to receive email notifications whenever Dave Mckay releases a new book.