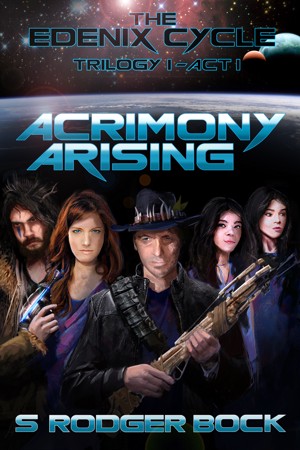 Also in Series: The Edenix Cycle

Review
Hannes Birnbacher reviewed on Feb. 16, 2018
(no rating)
The author proves he is quite gifted and able to write vivid descriptions and exciting scenes. You feel like you have been on board of the spaceship during the crash, and you feel you have known all the characters in real life. In this novel there aren't those faceless people, figures that lack all individuality except being beautiful women or merciless fighters.
That was the good news but there are lengthy passages with nothing but descriptions of the plot. Readers must fight their way through many pages of how more men than women died and how the community decided that a man can have more than one woman and somebody even had five wifes instead of four like the maximum agreed upon etc. I think an author should keep the boring outline of his plot (with no action, no dialogues) to himself and then write a story according to his plot, not just type his draft as something a voice from the "Off" is stating. This polygyny could have been explained in one sentence, describing how five spouses started a domestic fight or how the many sons helped to manage and enlarge the farm.
Furthermore, if you love to read those religious tracts pious people impose to you at your door, you made the right choice with this book. The author does not conceal his deep religious belief, so you will have lots of devotional paragraphs like starting with: "Creator, give us protection, she asked in her heart" or "Lord, help me find those girls (...) Dirk grumbled out his prayer". It is part of the plot, the controversy between piety and the need to kill evil people to save good ones, but you still must be able to tolerate those undertones.
Remark: I usually do not award ratings because in SF, it is too difficult do justice to a book. There is no reason to warn readers with a low rating; it is quite entertaining and You Set The Price, so you can decide if you wish to purchase the sequels.

(reviewed the day of purchase)
David Klein reviewed on April 22, 2015

This book is a deep, meandering journey into thoroughly developed characters in a pastoral ecosystem not unlike rural Naboo. The refreshingly strong female lead shows true spirit in the presence of debased captors. This story delves into the struggles and strengths of common science fiction story archetypes and reveals endearing characters with a plot structure reminiscent of The Horse and His Boy. Can't wait to read more from this up and coming author!

Amazing book! As you go through the story, you get very emotionally involved with all of the characters. The author did an amazing job at making all the characters relatable. Right away, the storyline moves, tugging at your heart strings and sense of adventure simultaneously, right on up to the surprise ending in the twist you just WON'T see coming!

Great book! It's a brilliant collide of Hans Solo and Indy. I couldn't put this down without waking early to find out the ageless "what's next". I am eager to see where this series leads.

Loved this book! It's Little House meets Space Odyssey and it totally works! The character development is outstanding and each chapter compels you to read the next. Looking forward to hearing more about the town folk of Edenix!