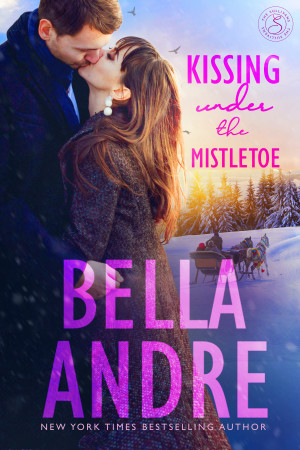 Kissing Under The Mistletoe: The Sullivans (Contemporary Romance)

The Sullivans have captivated the hearts of millions of readers worldwide, and now New York Times and USA Today bestselling author Bella Andre shares the love story that started it all...

For Mary Sullivan Christmas is, and always has been, about family. And this year is no different. As she awaits the arrival of her eight children and their partners at the cottage in Lake Tahoe, she hangs the ornaments that they made for her over the years. Each decoration brings with it a tide of memories, all of which she holds dear to her heart. But when she comes across the oldest ornament, the one her beloved husband, Jack, gave her on their very first Christmas together, Mary is immediately swept back to the first days of their whirlwind romance, to the love that would be the foundation on which they built the family she is so proud to call her own. Join the Sullivans this Christmas for a story that explores the wonder of the holidays, the meaning of family and a love that transcends time.

KISSING UNDER THE MISTLETOE is part of Bella Andre's #1 bestselling series about The Sullivans. While it can easily be read as a stand-alone story, you'll likely enjoy reading the other books, too.

"The perfect love story! This is the book that I have been waiting for. Bella Andre could not have written a more perfect couple. Their love and devotion to each other, is what most of us are all looking for in our relationships."

"Bella Andre outdid herself with Kissing Under the Mistletoe!"

"Bittersweet and beautiful at the same time. If you're fan of The Sullivans, you cannot miss this book!"

"The entire series is so wonderful that I have read them each twice, and have started purchasing them in paperback as a gift to my sister who shares my love for reading a truly great book!"

"OMG! I hadn't even finished the book and all I could think about was what a wonderful book this is. Mary and Jack's story is a book to be read over and over again. Bella Andre is truly a fantastic storyteller!"

Having sold more than 8 million books, Bella Andre's novels have been #1 bestsellers around the world and have appeared on the New York Times and USA Today bestseller lists 90 times. She has been the #1 Ranked Author at Amazon (on a top 10 list that included Nora Roberts, JK Rowling, James Patterson and Stephen King). Apple iBooks named her one of their “Bestselling Authors of All Time” (alongside Nicholas Sparks, Nora Roberts and EL James). And Publishers Weekly named Oak Press, the publishing company she created to publish her own books, the Fastest-Growing Independent Publisher in the US. After signing a groundbreaking 7-figure print-only deal with Harlequin MIRA, Bella's “The Sullivans®” series is being released in paperback in the US, Canada, and Australia.

Known for “sensual, empowered stories enveloped in heady romance” (Publishers Weekly), her books have been Cosmopolitan Magazine “Red Hot Reads” twice and have been translated into ten languages. Winner of the Award of Excellence, The Washington Post called her “One of the top writers in America”; and she has been featured in Entertainment Weekly, NPR, USA Today, Forbes, The Wall Street Journal, and TIME Magazine. A graduate of Stanford University, she has given keynote speeches at publishing conferences from Copenhagen to Berlin to San Francisco, including a standing-room-only keynote at Book Expo America in New York City.

If not behind her computer, you can find her reading her favorite authors, hiking, swimming or laughing. Married with two children, Bella splits her time between the Northern California wine country, a 100-year-old log cabin in the Adirondacks, and a flat in London overlooking the Thames.

Also in Series: The Sullivans

Reviews of Kissing Under The Mistletoe: The Sullivans (Contemporary Romance) by Bella Andre

Review
Cordy K. reviewed on Oct. 5, 2013
(no rating)
LOVED reading Mary's and Jack's story. Wonderful lovestory - you don't have to read the previous books to follow, it's in a way a sequel. The story has a HEA (and is only a bit bittersweet when you've read the previous nine books). Read and enjoy like I did.

You have subscribed to Smashwords Alerts new release notifications for Bella Andre.