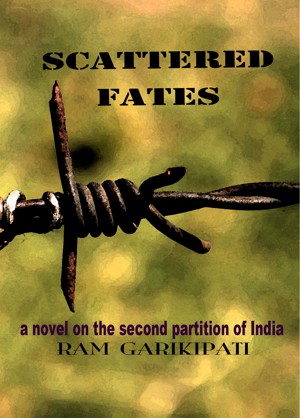 Scattered Fates - a novel on the second partition of India

By Ram Garikipati
Rated 4.88/5 based on 8 reviews
An alternate history novel, which unwraps in the backdrop of violent anti-Hindi agitations that rocked the State of Tamil Nadu (India) 50 years ago, narrated over two time frames – 1965 and 2005. It is the story of a son's search for the truth about his father's disappearance and the political intrigue that led to India's second partition into South & North, intertwined with the history of Korea More
SCATTERED FATES is an alternate history novel, which unwraps in the backdrop of violent anti-Hindi agitations that rocked the State of Tamil Nadu and is narrated over two time frames – 1965 and 2005.
It is the story, in lucid conversational style, of Subbaiah, a university professor who gets drawn to the ideology of Dravida Munnetra Kazhagam, a political party that opposed the imposition of Hindi as the sole national language on 60 percent of the country’s population. He is entrusted with the task of rallying students to protest against the government’s decision to remove English as an official Indian language. The violence that follows spreads across South India, and the military is called in to restore order.
He shelters Moon, a young injured foreign exchange student from Corea. While recuperating in his house, Moon gets acquainted with the culture and traditions of his host, including the intricacies of the caste system, thanks to his inquisitive nature and friendly banter with Subbaiah’s neighbor and best friend Ganapathy, a Brahmin, who is initially against this movement led by the backward castes, but slowly changes his mind.
Moon is put on the first flight home as the civil war spirals out of control.
Starting as a minor party functionary, Subbaiah ends up playing a crucial role in the freedom movement that ultimately leads to the second partition of India into Dravida (South India) and Hindustan (North India). He is even tipped to be the first Finance Minister of his newly independent country, but loses out to his political rival.
A decade after independence, Subbaiah suddenly disappears without a trace. While everyone assumes that Hindustan spies abducted him, there are also doubts that he may have willingly defected to enemy territory.
Thirty years later, Subbaiah’s son Naga, a journalist in Dravida, Asia’s most prosperous capitalist economy, plays host to Maya, a beautiful online friend from Corea who comes visiting for her research. She has strong sympathies for the socialist ideology and is pursuing her PhD on countries divided by civil wars. While helping her get acquainted with his country’s cultural traditions, they encounter a retired university professor, Ganapathy, who denies knowing Subbaiah, reacting in a suspicious and evasive manner. They are convinced that he is hiding something, suspect his role in Subbaiah’s disappearance, and are determined to unravel the truth.
The duo finally manages to get the truth out. It was not something they were prepared to hear.
Download: epub mobi (Kindle) pdf more Online Reader
rtf lrf pdb txt
Price: Free! USD
Add to Library
Create Widget
Tags: fiction politics civil war india indians alternate history asia india history indian culture asia novel asian culture partition india culture india religion asian adventure indian politics korean war history drama adventure asian stories south india korean police action indian army korean culture korean history india fiction india independence india novel india 1970s korea war india adventure india government asia countries drama historical korea economy korean war stories asian historical fiction korean war 1950 asian historical novels asia fiction asian writers indian author korea love stories asia pacific korea history
About Ram Garikipati

With 25+ years experience in Business Journalism/ Corporate Communications, I am now a Copy Editor/ Columnist with The Korea Herald, the leading English-daily in South Korea. I am based in Seoul for the past 14 years. Besides, I regularly contribute to newspapers and journals on economic issues pertaining to Korea. Prior to that, I was Chief Editor of a bimonthly magazine published by the Ministry of Agriculture, Food & Rural Affairs in Korea.
Before that, I worked as Chief Editor/ Corporate Communications of EUCCK, where I was responsible for Press Relations, which includes interacting with the media on a regular basis, clarifying their story inputs, issuing press releases and arranging media interviews for the President Group (President, 2 Vice-Presidents, Treasurer and Secretary General) of EUCCK.
I was also responsible for the in house business magazines- INFOMAG and INFOMAG REAL ESTATE. From start to finish, I was in charge of planning, interviews, writing, editing, design and marketing of the magazines, heading a team of six.
Even before, I worked in The Hindu Business Line newspaper (www.thehindubusinessline.com) at New Delhi from 1995 to 2004. I was responsible for Telecom & IT coverage of both government policy and corporate sectors and a fortnightly columnist and editorial writer. Earlier in my career at the same organization, I covered banking, macro-economic issues and infrastructure.
After getting an offer, I relocated to South Korea in April 2004, and worked at The Korea Herald as their business correspondent in Seoul, covering the operations of international companies and macro-economic issues.
I am currently working on two novels- a sequel to SCATTERED FATES, and a fiction on 5 global religious icons (Jew/Christian/Islam/ Hindu/Buddhism) meeting together at Central Park New York.
My blog: http://www.seoulbuffoon.co.nr

Scattered Fates
A novel on the second partition of India 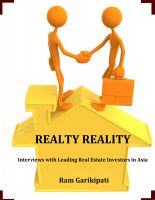 Not too literary. If you are looking for great work of literary fiction, look elsewhere. However, it is free, and the plot is interesting. Entertaining read. Good work by author.

My Husband of 10 years is from South India, so I was intrigued by this book and downloaded it on my iPad. I was impressed with the story, although it was difficult to understand at first. Very brave attempt and must congratulate the writer. I just created an account here at smashwords, and realized that there are many interesting writers out there who are not exposed to the world. As a mark of appreciation, I thought of giving a review for this book which I had downloaded from iTunes earlier. Great work, well written, smooth!

Read it on my kindle recently. Downloaded it again on my computer. Worth a read....interesting and different. very tight plot. Unfortunately not available as paperback, which I find more convenient (old school type). Fresh perspective on racism in India and it's history.

(review of free book)
Rakesh Vidyadhidharan reviewed on on Oct. 8, 2013

(review of free book)
Wolfgang Slawinski reviewed on on Oct. 5, 2013

Must say, I was forwarded a copy of the novel by a friend who said that since I am originally from East Germany, I could relate to this novel. Am glad I took the time to read it. Very racy and althogh it took time to understand the context, since I have never been in India, it was well written. An alternative world...which captures the elements of differences in India and ofcourse Korea which is still divided, like my country was . I give thumbs up! Specially since the author is giving it for free...much much better than some published fiction on India and Korea that I wasted money on.

Great read. Different genre and loved that it is set in my country. Also, some facts were a revelation to me as I from Mumbai ...and hardly knew South Indian culture. I never bothered about Korea (except for the occasional news on North Korean nuclear crisis). Opened my eyes. Highly recommended for the simplicity of language and imagination.

Imaginative take on Indian history. South Indians will love it more than north Indians. Korean history also well tackled. But the ending was abrupt. Definitely much better than the trash that become bestsellers in India today.

You have subscribed to alerts for Ram Garikipati.

You have been added to Ram Garikipati's favorite list.

You can also sign-up to receive email notifications whenever Ram Garikipati releases a new book.