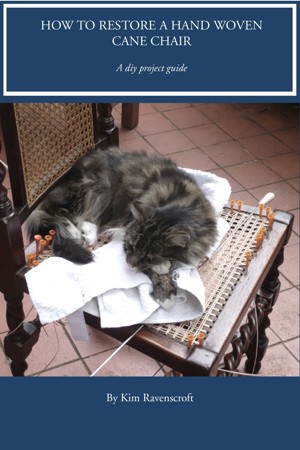 How To Restore A Hand Woven Cane Chair Seat

Kim restored her first piece of furniture to its Former Glory in 1981. It was a beautiful figured walnut glass display cabinet that was given to her by an Aunt in the 1960's

It needed a lot of work because when it was given to her, as a proper "fashionista" would, Kim decided it was too drab and brown, so she painted it with white emulsion...when she was aged seven.

The older and wiser Kim soon discovered that to undo her childhood fashion statement and return the cabinet to its original condition would be both a labour of love and a steep learning curve. It was to be the beginning of a lifelong love affair with reclaiming, restoring and recycling in general.

Many years of studying and experimentation later, in 1993 she became a full time restorer of antiques specialising in woven seating. She has written a variety of instructional papers, made three tuition DVDs and still restores and weaves full time creating many original works.

You have subscribed to alerts for Kim Ravenscroft.

You have been added to Kim Ravenscroft's favorite list.

You can also sign-up to receive email notifications whenever Kim Ravenscroft releases a new book.