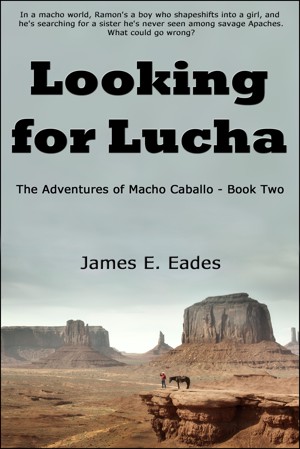 By James E. Eades
Ramon Caballo has a problem - in old Mexico, where men were men and women knew their place, Ramon has insulted the wrong party and been given a curse, that of turning into a girl and the most awkward time. He has discovered that he has a sister, raised by the Apache, somewhere in the wilds of northern Mexico. Now he must rescue her before an evil sorcerer gets both of them.

Having assumed the mantle of a life-long obsession with writing by selling a short story to Grit at the age of 13, James Eades has settled down to write fantasy, scurrilous sci-fi and western novels. He currently resides somewhere in the pine thickets of Arkansas and is reportedly trying to learn how to say the word 'Nuclear' with a straight face.

Also in Series: The Adventures of Macho Caballo

You have subscribed to alerts for James E. Eades.

You have been added to James E. Eades's favorite list.

You can also sign-up to receive email notifications whenever James E. Eades releases a new book.