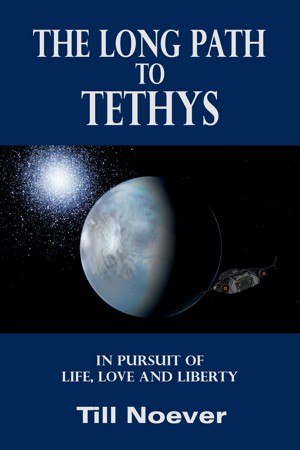 The Long Path to Tethys

By Till Noever
Why invent a world and then revisit it again and again? What relationship does an author have to his or her characters? And where it 'Tethys' anyway? I know: who cares? Well, if you do, read on. It's free. More
They say that the journey is more important than arriving. Well, they say a lot of things, but this one may be right. The journey to Tethys had some rather rocky patches. And it isn't even finished yet!
Download: epub mobi (Kindle) pdf more Online Reader
lrf pdb txt
Price: Free! USD
Add to Library
Create Widget
Tags: tethys series author profile
About Till Noever

I was born in Germany into a family of visual artists; surrounded by books and with TV being either unavailable or actively discouraged. I read like it was going out of fashion by the time I was six, grew up on Grimm’s and Anderson’s fairy tales, Karl May’s adventures, American crime fiction, and German pulp sci-fi, especially the perennial ‘Perry Rhodan’ series. I also developed a very early preoccupation with the notion of mortality. Personal extinction, decided the pre-teen, is a very bad thing indeed. Quite a few decades later, I still believe this to be true.

After studying astronomy and physics for over a year, one day I said ‘enough’ and walked out in the middle of a lecture, to apply for an immigration visa to Australia—just about as antipodean to my former life as I could go. I spent some years traveling around Australia and some of South and Central America, before, years later, resuming my studies in Australia, and later New Zealand—but this time with a strong leaning toward the life- and cognitive sciences.

For over a decade I earned my living with programming, then gave software development away in the late 90s and converted myself into an editor, technical writer, organisational process developer, graphic designer and occasional video producer. After years in the UK, US, Japan and New Zealand, my wife and I had settled on a rural property north of Brisbane. No street lights there, and on some nights the stars seems to be everywhere. Doesn't compare to the sky in outback Australia, but it's getting close. But then one of our daughters, who lives in Brisbane, regaled us with a delightful granddaughter; so now we're living in suburbia again. Some things are more important than others.

I also resumed semi-professional photography. StilI, I continue to have a day-job, because trying to earn a living writing or with photography, or even with both, is a mug's game, except for those who make it big (or at least upper-medium). I wish I could follow my passions full-time, but we have to live with the cards we've been dealt; and the stories I tell may just not resonate with the current Zeitgeist, and I also apply what you might call 'artistic integrity' to my photography work. Tough luck for me, I guess, but I'm not going to tell different stories or take crap pictures just because they're going to get me more money. That's missing the point and sacrificing one's personal integrity. And I consider the latter to be without a price.

While photography has been with me since the early teens, writing ‘came’ to me in my very-early twenties; but it was unformed and embryonic at best. In particular, I didn't know then what I know now: That it isn't about 'writing' per se, but about telling stories. The change of languages from German to English held things up a bit, as might be expected. So, serious and other-than-crappy writing didn’t manage to get a decent foothold in my life until some years later. There was also a young family—which changed life-priorities. My family comes first—always. Never mind about all that I-want-to-fulfil-myself-and-be-an-artist bullshit. You've got to have your priorities right, or you're not worth a damn thing.

So things got delayed yet a bit more. Now, more than a dozen novels, stories and screenplays, as well as a feature-length movie, later, with my two daughters grown up, I’m still telling stories and taking great pictures. It's a good way to spend your life. In fact, I am addicted to it. Tried to give up writing once, for a couple of years. Didn't work. Couldn't detox myself and was getting a bit stupid. That's just the way it is. You think smoking is addictive? Try story-telling. I was a smoker once, quite a long time ago, but managed to kick that habit; so I know what I'm talking about. It's psychotherapy, pure and simple; without the need for a psychiatrist.

I don’t think I’m ‘inspired’; but I’ve found that I don’t have to be. I basically write what I would like to read: stories populated with characters I’d like to love or hate; dealing with the basic parameters of the human equation: love, hate, generosity, greed, loyalty, betrayal, hope, fear, life, death, sex, peace, war, violence, forgiveness, retribution, curiosity, misunderstanding, reconciliation, ambition, surrender, cowardice, courage, and whatever else happens to come along. Among all that, good people who are trying to find their way through the minefields of their existence, attempting to eke a meaning from it; while not-so-good people, for reasons perfectly valid to themselves, do their best to put obstacles in the good-folks’ way.

My main ‘literary’ influence is Jack Vance. His Lyonesse trilogy is, to me at least, the most enchanting fantasy ever written. Night Lamp, one of his three last novels, is pure magic. Past influences also include Heinlein, Clarke, Saberhagen, and Asimov. I think that the craft of ‘story’ is also exemplified by the, now rather unfashionable and highly un-PC, tales of Edgar Wallace. I admire the contemporary fantasies of Tim Powers and James P. Blaylock; enjoy well-crafted psychological crime fiction by the likes of Jeffery Deaver; the ascerbic and gritty South-Florida capers of Carl Hiassen and James Hall; as well as the giddy escapist sci-fi of Stephen Gould.

So, yes, my novels usually have romance, and it's not always tame. Meaning they're not for kids. R16, most of them. That's because I agree with WB Yeats, who wrote that “Sex and death are the only things that can interest a serious mind.”

I believe that good, engaging stories, written or cinematographic, convey the truth about the human condition and its complexities better than any learned, ‘popular’, or ‘spiritual’ non-fiction treatise ever could. They do this by the simple expedient of ‘entertain’ and ‘show-and-don’t-tell’. And the less pretentious they are, the better they work. The less the ‘message’ shows, the more readily the audience will listen to it, though they may not even be aware that they are listening. This is the applied art of persuasion and planting the seeds of change into minds.

The focus of my stories is on people, because stories about anything else are basically boring. Everything else is just background. Lurking inside these stories is usually a serious framework of ethical and everyday-life issues, questions, suggestions. In Keaen, its sequels in the Tethys series and its prequels, these include my views on history and human destiny and its manipulation by those who would aspire to do so, however beneficent their putative reasons; social versus personal obligations; weighing society’s taboos against personal feelings; coming of age, whether it be in one’s youth or later life; finding one’s destiny; finding meaning; struggling against ethical turpitude; having hope; and staying alive—for only then can there be hope. I'm also preoccupied with the ethical question as to whether the decisions we make in life should be considered as instances, or examples, of higher principles (or maybe ideals) in action; or whether principles are, at best, over-simplified descriptors of the infinite variety of the possible. (In other words, was Plato talking nonsense? I suspect this to be the case.) I have no definite answer to this either; but it troubles me that the vast majority of humanity appears to have no notion that the question might actually be significant to their lives as well.

Story-telling—as well as photography as a 'artistic' endeavor—requires, above all, a high standard of personal integrity. I completely agree with Harlan Ellison's dictum about taking your work seriously, not yourself. If you don't tell stories because you really want—possibly need!—to, do the world a favor and find something else to do. It took me decades to figure out that it's not about 'art', but just the simple, yet glorious, craft of telling stories to entertain people—and through this help them live their lives, because they can weave them into their lives and thus become stronger and more capable of coping with its vicissitudes.

Next to soldiering and prostitution, story-telling is probably one of the oldest and most venerable professions extant. We owe it reverence and integrity; instead of using it to seek glory, adulation and wealth. If we, by some great streak of good fortune, happen to find these along the way, so much the better. But let us never forget why we started doing it in the first place. The moment we do, we will lose our way and our sense of purpose.

I love fairy tales. That's probably because I grew up with them: the real thing; pure Brothers Grimm, unadulterated by political correctness and cutesy sanitization. Maybe that's why I love Bill Willingham's comic series, Fables; which is like the Brothers Grimm's tales—and every other fable ever concocted, including and freely mixed in with others you wouldn't expect—on speed. I sense the presence of a kindred soul, who obviously loves these stories just as much as I do.

People: My wife and daughters. Period.

Movies (a list subject to being updated): Blade Runner (the original and also BR 2049), The Illusionist, Avatar, The Princess Bride, Stardust, The Next Three Days, The Adjustment Bureau, Hereafter, Silverlinings Playbook, Star Wars (Eps 4-6), the new Star Treks (the old ones, too, but they're dated), Arrival, Once Upon a Time in the West (best spaghetti western ever), Wonder Woman.

Pet Peeves:
• Any sentence starting with "But I was going to..." or something along those lines.
• People who refuse to take responsibility for their actions or who endlessly complain about the consequences of their choices.

Serious dislikes:
• Politicians. They, either by nature or by eventual adaptive necessity, are (or become) creatures of a lower order than your average human being. Exceptions are extremely rare. In fact, there may be more mutated chickens with teeth than trustworthy politicians.
• Religious and/or ideological zealots. Actually, I even have issues with religious and/or ideological moderates. And I most certainly have issues with OCD-suffering atheists, who seem to feel an unhealthy missionary urge to enlighten the benighted masses. (Sorry to burst your bubble, guys, but you know SFA about what *really* behind the universe and everything; just like everybody else. Isnt is that which makes life really, really interesting?) And, BTW, if I'm even remotely right about the 'multiverse' ontology I outlined in Tomorrow's Yesterdays then most extant philosophy and especially metaphysics is bunk.

You have subscribed to alerts for Till Noever.

You have been added to Till Noever's favorite list.

You can also sign-up to receive email notifications whenever Till Noever releases a new book.