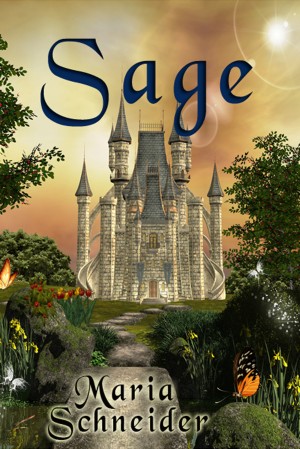 Sage: Tales from a Magical Kingdom

By Maria E. Schneider
Rated 5.00/5 based on 4 reviews
Sword and Sorcery meets Agatha Christie: Three novellas introduce the Kingdom of Sage and those who protect its boundaries.

Toil, Trouble and Rot: Sage is under attack from a deadly and mysterious enemy.

Dungeons and Decay: Find out how far a mother will go when her child is in danger.

This is a collection of three fantasy stories around a group of characters. What makes this fantasy refreshing is that the protagonist is a grandmother magician. The stories are about her quest to help protect not only her kingdom but also her family. I would love to see more stories with these characters.

Why do people read fantasy? Why do they want to believe in magic? Is it something to do with religion? Who knows? Some academic somewhere has probably written a paper on the subject. My hunch is that it's related deep down to a desire for happy endings, common in we humans. As a skeptical guy who has a handle on reality (I like to think so) I've never read much fantasy - although I do like the Lord Of The Rings and Harry Potter movies, which is something of a contradiction I suppose (like the man who reads Playboy for the articles I watch fantasy movies for the special effects). If you're like me and you're searching for an introduction to a genre that you might have previously avoided, you could do a lot worse than read these stories. The secret is to suspend disbelief and go with the flow. Don't allow logic or reason to interfere. These fantasies do what they need to do: ensure that good triumphs over evil, that magic wins out in the end, that friends and family are important, and that endings are always happy (well, happy-ish anyway). Along the way, you might even learn a thing or two about herbs.

As much as I love fantasy, I don't read a lot of that genre nowadays, since it's so hard to separate the wheat from the chaff, with so many authors trying to be the next Tolkien or Rowling. Nevertheless, I had seen some favorable comments about "Sage: Tales from a Magical Kingdom," and I noticed that it was a short book, so I downloaded it.

It's a nice concept. The author, Maria E. Schneider, has created a mythical magical kingdom and introduced the reader to this realm through three short stories featuring the main characters. In a different twist, instead of having a world inhabited by ordinary people with a scattering of wizards, witches, and the like, in Sage, everyone is a magician of sorts, with each person specializing in a certain form of magic. The first character we're introduced to is Demetria, an aging grandmother who is a Master Gardener, having the ability to communicate with and influence plants. Demetria's husband, Ward, is a Stone Master, who has the power to manipulate stones (which comes in very handy in one of the stories).

In the first of the three stories, "Toil Trouble and Rot," Demetria discovers that the kingdom's crops are rotting due to a magic fungus introduced by Sage's arch enemies, the Rats who live just beyond Sage's borders. Demetria and Ward, with their children, Gavin and Xylia, set off to determine the extent of the damage and to destroy the fungus. With help from their friends, each of whom has a special magical power, they go in harm's way to battle the fungus, which is as deadly to humans as it is to plants.

"Dungeons and Decay," the second story, is about a search for Demetria and Ward's son Gavin, who is missing and is feared to have been captured by the Rats in the kingdom of Ratdom. In "Call to Arms," the third story, Demetria and Ward and their friends are involved in some nastiness by creepy crawlers from the Slithering Kingdom.

Sage is a magical kingdom, but the magic is white magic, or earth magic, where the human inhabitants are finely attuned to their natural surroundings and can subtly influence and communicate with objects like trees and stones and animals. There are no wizards hurling lightning bolts or casting evil spells in Sage, which was a relief from the typical fantasy story. In that sense, Sage is reminiscent of an earlier time when people were more aware of the natural world and their surroundings. Demetria, Ward, and the others in Sage are interesting characters and certainly sympathetic ones as they go about protecting their land from the dangerous, evil creatures who surround them.

Ms. Schneider's writing is very polished and professional, and I found no spelling or grammar errors. Also, the formatting was perfect. I take neither of these for granted, and the author obviously took a great deal of care in editing, the bane of many authors today.

I'm not sure what kind of reading audience "Sage" is targeted toward, but in my opinion, it's suitable for children through adults. There are some scenes that might frighten a very young child, but any kid who made it through Harry Potter would certainly be okay with "Sage."

My only negative comment - and it's a very minor one - is that there are only three stories in the book. The magical realm that Ms. Schneider has created certainly invites more stories, possibly even a full-length novel about Sage and its people and their relationships with other lands and people beyond its borders.

In the fantasy genre, it's getting harder and harder to find new books that are both original and well written. Maria Schneider has written a winner with "Sage."

I have a hard time reading on-line for enjoyment and I don't own one of those portable readers yet. That's to explain why it took me quite a long time to read this volume.

Once I did get to reading, I found this book virtually hard to put down. Sage is a wonderful fantasy kingdom described for the reader by the main character. Demetria is a plant wizard with the ability to control and speak to plant life, which does tend to make them grow very well. Her husband, Ward, is a dungeon master who can control stone.

All of the inhabitants of Sage have some type of magical affinity, whether to plants, stone, animals, and a variety of other talents.

The Rats who live in a neighboring kingdom, however, are not amiable with the humans of Sage. Therein lies much of the conflict in these stories. In the first tale, the Rats have sent a plague of rotten mold into Sage. Who better to fight this menace than Demetria, the master gardener? With great personal sacrifice, Demetria, assisted by other wizards, fights off the slime threatening her land.

In the second story, Demetria and Ward must rescue their son from the Rat Kingdom. They get some surprising help from those believed to be the guilty parties.

Okay, I'm writing this review before I've read the third tale, however, I will absolutely do so and know I will enjoy the heck out of it. I've become a Demetria fan. I look forward to seeing more tales from the land of Sage. But, Maria, let's get this book in print so I can take it to bed with me. Now, that's where I can read for enjoyment.

One last note for Maria: Fifty-five is NOT old!