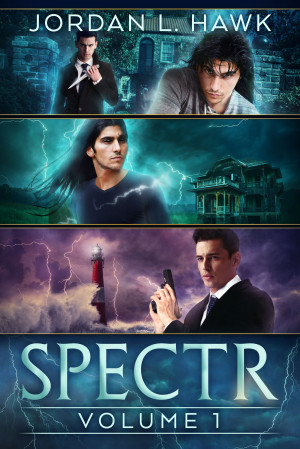 Rated 5.00/5 based on 3 reviews
Boxed set of the first three SPECTR novellas! What happens when an exorcist falls in love with the demon he's supposed to destroy? More
From best-selling author Jordan L. Hawk, the first half of the SPECTR series is now in a box set!

All for less than the separate retail price!

What happens when an exorcist falls in love with the demon he’s supposed to destroy?

Unregistered paranormal Caleb Jansen only wants a normal life. But when a demon murders his brother, Caleb must avenge Ben’s death, no matter what the cost. Unfortunately, his only allies belong to an extremist group who would kill Caleb if they found out about his talent.

Gray is a wandering spirit, summoned to hunt and destroy demons by drinking their blood. This hunt goes horribly wrong, and for the first time in his existence Gray is trapped in a living, human body. Caleb’s body...and Caleb is still in it.

Hotshot federal agent John Starkweather thinks he’s seen it all. But when he’s called to exorcise Caleb, he finds a creature which isn’t supposed to exist outside of stories. For Gray is a drakul: a vampire.

When John fails to exorcise Gray, the countdown is on. If he can’t remove the drakul before 40 days pass, Caleb will be possessed forever. In the meantime, the three must find a way to work together. As they hunt down demons and save the innocent, the heat between the two men explodes into passion...and John discovers a different kind of temptation, one that calls into question everything he believes.
Available ebook formats: epub mobi pdf lrf
First 20% Sample: epub mobi (Kindle) lrf
Price: $4.99 USD
Buy Add to Library Give as a Gift
How gifting works
Create Widget
Tags: fbi romance vampire demon werewolf collection psychic possession incubus lycanthrope ghoul box set
About Jordan L. Hawk

This book came recommended to me as being an excellent 'benevolent possession' story, because I'd been a huge fan of the recent Venom movie. The wonderful story scratched exactly the itch I had, and I've now read the entire first series in three days.

I am in LOVE with the characters, and impressed by the well thought-out overarching plot of the series as well as the plot in each of the individual books. The suspense had me on my toes and I simply could not put the books down.

This is a character-driven series that has a rock-solid foundation with its plot and universe, and it's an absolute pleasure to read!

I highly recommend this to anyone looking for an interesting new take on possession-type 3-way romance.

A fan of Hawk's from her Whyborne & Griffin series, this one I looked at several times before I downloaded the first one for free. By the time the first book was done, I purchased this 3-volume set because yet. It's that good.

Artist Caleb who finds himself inhabited by a dragul, Special Agent John who can't help be attracted to the poor guy. He's also guilty because he feels at fault for what happened to him and his family. Add in ghouls, demons, a religiously insane group out to kill all 'mal's, government agencies, sex, and you have yourself quite the story.

Download the first for free if you aren't sure, but once that happens, I'm positive you'll be downloading this whole volume. And probably the next 3 in the series.

Alright, I glommed and want more!