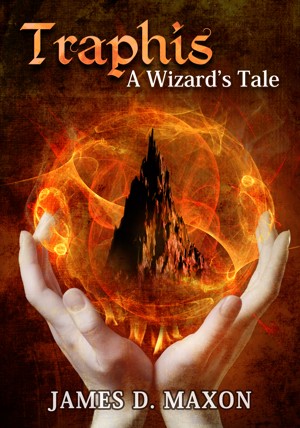 James D. Maxon (1977-Present) was born at Elmendorf Air Force Base in Anchorage, Alaska. His parents were divorced when he was three-years-old. Raised in a strictly female household, James grew up in the midst of mental illness and depression. He, himself, struggled in school due to a learning disability. Without a positive male role model, James learned how difficult it can be for children to realize their true potential. Having acquired a love for fantasy at a young age, he began to write stories of his own, providing children and teens with messages of faith, hope, and insight. Overcoming his disability, James graduated college with a 4.0 GPA. He deepened his connection to the creative world by following a career in design. He now lives with his wife and daughter in a suburb of Austin, Texas, and spends much of his free time applying his imagination to the real world.

Sample of Traphis, Read by Jim Baker
Reading of the teen fantasy novel, Traphis: A Wizard's Tale. Narrated by Jim Baker (best known for his role as Henry in The Tripods series produced by the BBC) and written by James D. Maxon (author of The Cat That series).

You have subscribed to alerts for James D. Maxon.

You have been added to James D. Maxon's favorite list.

You can also sign-up to receive email notifications whenever James D. Maxon releases a new book.