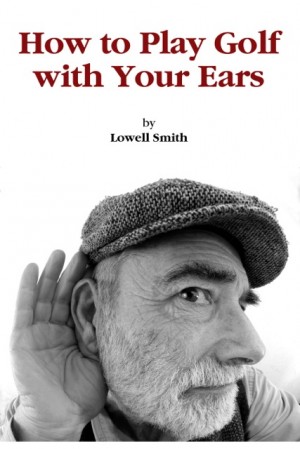 How to Play Golf With Your Ears

By Lowell Smith
You will share the author's unexpected discovery of a unique technique for allowing your subconscious mind to control your golf swing.

"sometimes I close my eyes to heer my pupils better. Ye might try it yourself sometimes, just listen’ to yer foursome as it ‘twere a piece o’ music”- Shivas Irons

A must-have book for anyone who delights in the mystery, spirit, and personal challenges of golf. More
Ever feel like quitting golf? (be honest)

In this highly entertaining book the author shares his personal mid-life golfing crisis. He chronicles the emotional frustrations and disappointments of losing his once proud skills. His determined campaign to become a born-again gamer will inspire golfers of all ages.
His quest for understanding and personal enlightenment leads him to the enduring insights of Shivas Irons, the legendary Scottish teaching pro from the Links of Burningbush, immortalized in author Michael Murphy's classic tale of Golf in the Kingdom.

Lowell Smith has had a life-long curiosity about the American way of life. For twenty-seven of those years (1977-2004) he authored a nationally syndicated feature which answered questions from readers about their lifestyle interests. His column, The Average American-How do you compare? , was read weekly by some 12 million Americans in more than 120 national and regional newspapers. In addition, the feature was used as resource questions for the television game show, Hollywood Squares.

His fascination with the game of golf has paralleled his lifestyle interests for more than four decades “Golf is that unique athletic adventure that forces you to attempt to understand yourself more than any other sport, “Smith says. His life-long appreciation for the examined life has led him to delve into the historical, philosophical and emotional dimensions of the game.

Lowell Smith lives in St. Helena, California, in the heart of the Napa Valley wine country. He is active in community affairs and served a twelve year stent as the town’s Mayor.

You have subscribed to Smashwords Alerts new release notifications for Lowell Smith.

You have been added to Lowell Smith's favorite list.

You can also sign-up to receive email notifications whenever Lowell Smith releases a new book.