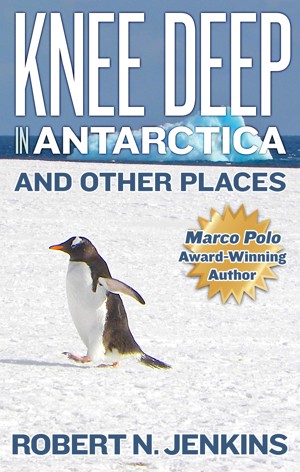 Knee Deep in Antarctica... And Other Places

By Robert N. Jenkins
Rated 5.00/5 based on 1 reviews
When Robert N. Jenkins was named the St. Petersburg Times’s travel editor he had no passport. He’s now filling his third, but fewer than two out of five Americans travel outside the US. In this book of travels beyond North America – Antarctica, Bangkok, Israel, and more, Jenkins notes while the world’s populations may share a lot of everyday life, the differences are eye-opening, perhaps enviable. More
When Robert N. Jenkins was named the travel editor of the St. Petersburg Times in 1987, he was expected to report on the entire world, not just western central Florida. But Jenkins had no passport.

Which put him in the majority of Americans, as fewer than 5 percent of his countrymen then held a passport. The numbers are much higher now – about 36 percent – largely due to border-entry restrictions enacted after the terrorism of 9/11/01.

Still, that means fewer than two of every five Americans see the need to travel outside the country. What are they missing in what is, after all, the “global village’’ predicted as far back as Greek philosopher Diogenes.

In this book of articles from his travels beyond North America, Jenkins recounts revelations and insights he gained during his travels.

For instance, while he likens Prague to a buffet of sweets prepared by a doing relative, Jenkins recalls westernmost Ireland as notable for a countryside dotted by walls and beehive-shaped domes, all assembled centuries ago with stones but without mortar.

The author was struck by the bright glimmer that is downtown Stockholm, yet its large neighborhood dating to the Middle Ages bustles with an energy probably unknown when the area was new.

A different sort of contrast exists at the landmark Doge’s Palace in Venice: a façade so graceful it seems to be made of sugar candy, but within its walls are jail cells and torture chambers.

The author recounts that Thailand is “not one nation but two: There is Bangkok, and then there is all the rest of Thailand.
“The countryside boasts mist-shrouded, forested mountains and beaches framed by breathtaking scenery, but the capital is filthy and smoggy.’’ Bangkok’s tawdry PatPong district is a landmark of the world’s sex trade, countering the exquisite architecture of exotic temples.

Similarly, Jenkins’ articles juxtapose the manmade eye candy of the neon-colored houses of Burano, Italy, and the staggering, snow-clad vistas of Antarctica.

The theme of Knee-Deep in Antarctica … and Other Places is that while the world’s populations may share a lot of everyday life, the differences are eye-opening, remarkable, perhaps enviable.

But, Jenkins says, you need to experience them in person. For those who have not, he serves a sample of them in this book.