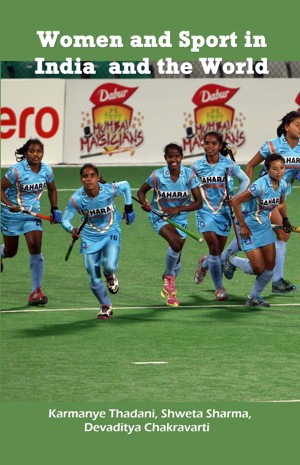 Women and Sport in India and the World: Examining the History and Suggesting Policy Reforms

By Karmanye Thadani
Rated 5.00/5 based on 1 reviews
Do you know of female cricketers outperforming male counterparts while playing each other? Or about female car-racers who compete with men and win? Ever wondered what challenges female sportspersons face and have faced historically? What steps have been taken to promote gender equality in sport? And what more needs to be done? Here's a book that deals with these questions. More
Co-authored by three lawyers/law students, namely KARMANYE THADANI, DEVADITYA CHAKRAVARTI and SHWETA SHARMA, and with a foreword by eminent Indian sports law luminary JUSTICE MUKUL MUDGAL, this is a short and inexpensive (NOT EXPENSIVE) book dealing with gender discrimination in the field of sport and the challenges female sportspersons have to and historically have had to face, also mentioning public policy solutions from a socio-legal point of view. For those not interested in legal dimensions, the preface mentions the chapters such people can skip, and the book would certainly make an interesting read for such people too. While the book focuses on India, it takes a much larger global worldview in terms of examples and would be of interest to readers across the globe.

He is an Indian writer who is a lawyer by qualification, having pursued summer courses in the University of Oxford and LSE. He is keenly interested in sociopolitical movements, theology and human rights issues, especially in South Asia.

"Rarely do I read a book, from which I have learned so much like from Women and Sport in India and the World: Examining the History and Suggesting Policy Reforms by Karmanye Thadani and his two co-authors, Shweta Sharma and Devaditya Chakravarti."

I am embarrassed to say that I never thought about it. I grew up in Austria, where skiing is the National sport #1, and special high schools, secondary schools with special emphasis on athletic training, keep guaranteeing that Austrian skiers keep winning. Now living in the United States, where "sports enjoys a commercial status, value and market", I never thought about the hardships, which female athletes endure in other countries. I also did not know that in the United States the participation of women only grew "after a deliberate legal intervention". Even in the United States Title IX was passed only in 1972, "which states that there could be no sex discrimination in educational programmes. To provide more opportunities for women, the US Department of Health, Education and Welfare brought the Athletics Regulation in 1975 to ensure that women were not denied any opportunity that was available on the playing field."

The book deals with the societal problems when girls cannot engage in sports: their health, their self-esteem, their self-worth suffers; in India, as well as in other countries in the region, women are driven into early marriages, because that's what society expects from them. The book makes an interesting read because Thadani compares these situations with the ones of American female athletes not too long ago. In times of dramatic TV coverage of all major sports event in the US we forget easily, that Julia Archibald Holmes, Helene Madison, and „Babe“ Didrikson had it quite difficult - less than 100 years ago. Karmanye Thandani tells of "patriarchal societies, and myths about sport having an adverse effect on women’s health and/or beauty...", that men want to have women at home, cooking and rearing children.

It was therefore that the UN Division for the Advancement of Women published an official document, which cited various health benefits sports can have for women. While I knew that there were issues with the attire of female athletes (specifically Muslim women) when they competed in worldwide competitions, the problems go much deeper.

The book does a great job to list the problems and achievements of other countries than India: Croatia appointing a woman to coach its men’s football team, the Chance to Shine programme becoming successful in England, Saudi Arabia sending a women’s contingent to the Olympics, and the Afghan Women’s Network (AWN) working to empower Afghan women, which includes encouraging them to participate in sports.

Naturally, most information in his book is about Indian female athletes and some of the information was heartbreaking:
"Another example that can be cited is that of female international level Indian archer Nisha Rani Dutta selling her silver bow, costing Rs.3 to 4 lakh, gifted to her by her Korean coach at Mittal Champions Trust, for a measly Rs. 50,000."
And, about the women's cricket world cup being hosted in India and the media not giving the topic the attention it deserves, especially since cricket is India's top sports. Which makes it even sadder that many Indians would not know that India's women’s cricket team currently ranks 1 in all formats.

The author demonstrates his immense knowledge, his smart suggestions how to improve the situation are build on legal documents and resolutions, e.g. from the United Nations:
“Increasing access for women and girls to physical education and sport helps build confidence and promotes stronger social integration. Involving girls in sport activities alongside boys can help overcome prejudice that often contributes to social vulnerability of women and girls.”

Anyone, who thinks, that this topic does not deserve the highest priority ought to consider that "Spalding Sports introduced the first baseball glove specifically designed for a woman’s hand only in 1996". Indeed, I too was surprised to hear that. Like stated before, I learned a lot from Thadani's book.

Highly recommended to athletes, college students, feminists, law students, and anybody, who wants to create a better world. Thank you, Karmanye Thadani, Shweta Sharma and Devaditya Chakravarti for this excellent and important work.

You have subscribed to alerts for Karmanye Thadani.

You have been added to Karmanye Thadani's favorite list.

You can also sign-up to receive email notifications whenever Karmanye Thadani releases a new book.