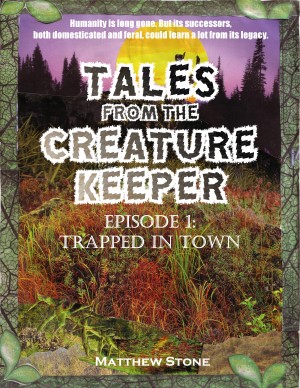 Tales from the Creature Keeper Episode 1 - Trapped in Town

By Matthew Stone
In an age of rediscovery, various "tribes" are digging up the remains of humanity and using them to re-establish civilizations. Some are prosperous, while others are dubious, such as the country that two slaves, Razz and Jerry, have come from. If they make the decision to buck the relative safety under their master, how long will they have to live like wild animals before they find a new home? More
Let's face it: humans suck. I should know since I am one and have been for over 30 years now. Of course, that's an easy and clichéd statement to make, but actually it starts to get fascinating when you ponder it and explore its intricacies. Would the planet really be better off without humanity since we seem to be the only ones able to appreciate it and leave a distinct mark on it? Heck, what might future archaeologists think of us when they dig up our remains? Who might our successors be millennia from now and would they improve upon what we did and avoid our mistakes, or would they behave exactly like us with all the good and bad that entails?

In Tales from the Creature Keeper, overpopulation, global warming, and various other factors have come together to spell doom for humanity. When plans to fix the planet failed or became too little too late, humans went and modified themselves instead to become better at surviving on their increasingly hostile Earth. They spliced their genes, giving themselves the powers and instincts of the animals that were still alive, and thus created the tribes. Prejudice toward the tribes soon followed though and in the end, humans were driven to extinction. Since then, the planet has slowly recovered to its lush green state and the tribes are now starting to dig up and rediscover the inventions and civilizations of their human ancestors.

The focus of the story is Rasmus "Razz" Oreon and Jerry Jaspers, two slaves fleeing from a northern country. At first they have no idea where they will go or how they will live, but the small town of Timber River looks appealing, and events seem to play out in their favor such that they might have a chance at joining the township and starting new lives. They have to be tricky though, as their owner is stuck in the same town simply because he doesn't have any other avenues for career advancement. Their allies include a foreign spy, a carefree bellhop, and a harried roboticist, while their enemies include a playground architect, a feral hatter, and the mayor of town, who is also a combination hacker and archaeologist known as a "Data Delver".

There is a tendency to confuse Matthew Stone with a certain famous producer who is best known for creating the show "South Park". Matthew Stone actually tore himself away from Matt Stone years ago through sheer force of will, similar to how Nei was born from Neifirst in Phantasy Star 2.

He is a mediator and contributor for The Sanctuary Crew, a group of gaming enthusiasts who regularly livestream their favorite old and new games. In 2008, he and his family fled to Northern Washington due to the increasingly hostile weather in the Midwestern United States. From their elevated cabin, they expect to be perfectly safe when global warming causes most of the Olympic Peninsula to vanish underwater.

Tales from the Creature Keeper began as a series of short stories about his toys, but grew in size and maturity as he did. Now they're both too big, but Mr. Stone can get away with it because he's 6'5" and enjoys cycling, while the book... well, it remains to be seen if the book can get away with it that easily. 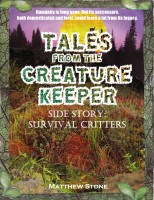 You have subscribed to alerts for Matthew Stone.

You have been added to Matthew Stone's favorite list.

You can also sign-up to receive email notifications whenever Matthew Stone releases a new book.