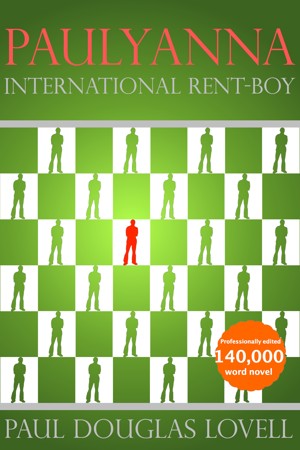 Raised by my father, the youngest of five, I spent many hours ‘Playing Out’. My school years were disruptive. Seen as an inconvenience standing in-between my freedom and the big wide world. Uneducated and somewhat troubled I went to London.

I spent twelve years working as a rent-boy (a male prostitute) I did some travelling and met some interesting people.

In 2000, whilst in Ibiza I found a husband (civil partner) and a new chapter in my life began.

After the death of my father I plucked up the courage to tell my tale. My lifetime ambition to become an author, realised in ‘Paulyanna International Rent-Boy’.

Gone are the pressures of Big City Life nowadays, I enjoy the small pleasures in life.
I live in a detached property set in the foothills of the Jura mountains. I am surrounded on all sides by hills and trees, a small stream runs through the centre of the village. My own piece of paradise, one that inspires me to try my hand at writing haiku poetry. I also enjoy geo-caching, gardening, reading, designing graphics and listening to music.

It couldn’t be better timed that Paulyanna: International Rent-boy by Paul Douglas Lovell has been published exactly 100 years after Pollyanna (by Eleanor H Porter) first hit the literary scene. And yes, Paulyanna, coined by one of Paul’s friends, is a clever adaptation of Pollyanna. Paul is Pollyannaish through and through. And that’s a real word – Pollyannaish. It’s in the dictionary. (Check if you don’t believe me!) It means someone who’s incorrigibly optimistic and upbeat. And that’s what Paul is.
Paulyanna follows Paul through early adulthood as he begins to make his way in the world. Emerging from an underprivileged childhood in the Midlands, Paul heads to London to take up his first job as a kitchen porter. He’s delighted to be in the city, where he’s free to be himself – to be independent and to express his sexuality. From portering he moves on to barwork and later a responsible job in the music TV industry, but increasingly he comes to rely on his alternative career as a rent boy to support him.
A character himself, with his strength of personality, slightly unconventional interpretation of the Catholic faith and strong belief in karma, Paul encounters some equally fascinating people along the way. Some are good, generous and sympathetic, others less so. Others, such as his friend Richard whom he calls his ‘partner in crime’, are a bit of both. He travels to Spain, Holland and America and his amazing eye for detail really comes into play here in his depictions of the appearance and atmosphere of the places he visits.
Drugs, streetlife, friends succumbing to Aids, loneliness – there’s a tough, gritty element to the book but the overall impression is of hope and cheerfulness. The Pollyanna in Paul won’t be beaten. As you read the book you’re rooting for things to turn out well for Paul who doesn’t ask for much – a settled loving life with a husband and a dog – so when the dark, handsome Michael turns up, you’re holding your breath. Will he be the one to cement Paul’s happiness?
The book is so well written. Paul’s style is easy to read, ranging from the poetic to the pithy. He’s a great companion through the pages of the book. This is a thoroughly modern, entertaining memoir that I recommend to everyone.

You have subscribed to alerts for Paul Douglas Lovell.

You have been added to Paul Douglas Lovell's favorite list.

You can also sign-up to receive email notifications whenever Paul Douglas Lovell releases a new book.