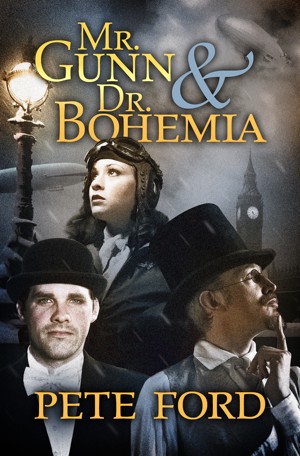 Newspaperman Cornelius Gunn investigates a series of thefts across London. Someone is stealing inventions and designs—for what purpose, Gunn can’t even guess.

While attempting to identify the criminals, he and his feisty wife, Sophie, meet the enigmatic Dr. Bohemia. Before they know it, they’re on the trail of a conspiracy, and swept into an adventure that carries them to Paris and back, and a fight against a mysterious and powerful enemy. The stakes are high. If they fail, all of Europe will be plunged into war.

Pete Ford was born in England and lived in Wales and Switzerland before moving to Texas. He now lives in Colorado with his wife, Kate. They have two grown-up sons and two not-at-all grown-up granddaughters.

He spends his days as a software developer; he once designed a system that accidentally dumped twenty thousand tons of water into the wrong part of the River Thames within minutes of going live. Today, he uses those same skills to develop web applications for the US government.

Although he has been writing short stories as a hobby for many years, Pete decided it was finally time to fulfill a dream—to write a book and get it published. And, as he has been a fan of Steampunk stories since before the term Steampunk had even been coined, the genre of the story was a foregone conclusion. He is now developing ideas for more books to come.
When he isn’t working or writing, he reads, watches movies, and plays computer games including World of Warcraft, and the Half-Life and Portal series. He loves science, history, and cheese.

You have subscribed to alerts for Pete Ford.

You have been added to Pete Ford's favorite list.

You can also sign-up to receive email notifications whenever Pete Ford releases a new book.