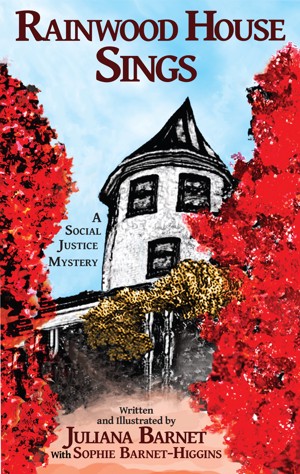 By Juliana Barnet
Rainwood House, a decaying post-Civil War abode lightly haunted by musical plumbing and old civil rights struggles, is home to beleaguered University of Maryland groundskeeper Marlie Mendíval and her quirky, artistic granddaughter Samantha. Marlie rents a room to Demetrius, a cheerful community activist and horticulturist, unaware that he has been hiding from the police in her basement. More
Rainwood House Sings is a ‘social justice mystery’ about organizing, local history and musical plumbing. A beleaguered ex-union organizer, a radical horticulturalist on the run from a cop-shooting, a bat-loving nine-year-old and a glamorous computer guru join forces to save Rainwood House, a decaying post-Civil War abode lightly haunted by the echoes of popular struggles. Will they succeed in making Rainwood House a people’s history museum and modern Underground Railroad stop, or will the arrogant co-owner throw them out to turn Rainwood House into an elite showplace?

Juliana Barnet is a social justice activist, artist, musician, anthropologist, writer, popular educator, Spanish language translator and interpreter. Many of the situations in Rainwood House Sings are drawn from experiences she participated in. She decided to write Rainwood House Sings, the first of the Rainwood House series, because she is an avid reader of fiction. While continuing to seek novels starring folks from her tribe, she decided that she had better get in there and write one. Juliana Barnet lives in Maryland with Brian Higgins, co-author-illustrator-daughter Sophie Barnet-Higgins, and Melau the dog.
With other colleagues she has launched Life in the Liberated Zone, the publisher of this and future books about the life and times of activists.
Sophie Barnet-Higgins (now fifteen) has always loved writing stories, as well as doing theater and, especially, drawing which, as with “Samantha,” sometimes got her into trouble at school. Undaunted, she continued developing her talent in sketchbooks and on the computer. Now in the Visual and Performing Arts program at her high school she no longer fears being reprimanded for drawing (especially if she can manage not to decorate her math homework). She especially likes manga and anime, and also plays the piano, cooks, does art with little kids, reads and sings. She is fluent in Spanish and is studying Japanese
Read her words in the Authors Note at the beginning of Rainwood House Sings to find out how she liked her experience co-authoring and illustrating the novel.

You have subscribed to alerts for Juliana Barnet.

You have been added to Juliana Barnet's favorite list.

You can also sign-up to receive email notifications whenever Juliana Barnet releases a new book.