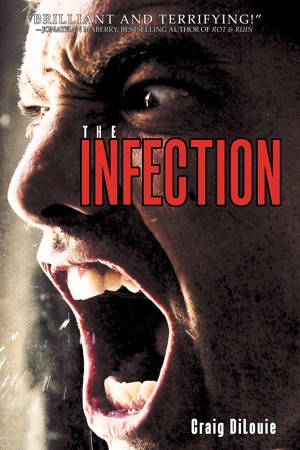 By Craig DiLouie
Rated 3.67/5 based on 3 reviews
The world is rocked as one in five people collapse screaming before falling into a coma. Three days later, the Infected awake with a single purpose: spread the Infection. A small group—a cop, teacher, student, reverend—team up with a military crew to survive. But at a refugee camp what’s left of the government will ask them to accept a dangerous mission back into the very heart of Infection.

Also in Series: The Infection

Kept my interest till the end. Not many 'zombie' books can do that.

It was a fun story of zombies and monsters out to get humanity.

Doom is here and with it hitherto unimaginable horrors. Hard hit by a virus a large part of the U.S. population spend their last days screaming before they die. Three days later the deadawakes and they only want one thing: to continue to spread the virus. Those who survived the initial disaster barely have time to recover before they have to deal with the next. And it just gets worse. And worse. The dead mutates.

We get to acompany six people during their desperate struggle to survive while process what just occurred. The Infection is a story of post-traumatic stress en masse without a shred of debriefing and crisis management. The main characters lose everything in a few intense and terrible days, to directly realize that the only thing that awaits is a future populated by living dead and surreal monsters.

The small group of survivors is consisting of: Sarge, an experienced tank commander just returned home from Afghanistan. Wendy, a police officer with not too long in the profession and with high ambitions and as high morals. Ethan, a teacher who lost his entire family and is paralyzed by grief. Todd, student and role-playing nerd who initially sees the new arrangement as an opportunity to avoid bullying and alienation. Paul, a minister who becomes the story's Job when his faith is put to the test. And finally, Anne, a physically and mentally strong woman who takes the lead, but carries a rage against those infected that even scare the other people in the team, while they need her desperately.

They are fighting their way, sometimes feet tby feet, watching each other’s backs in search of a haven. A refugee camp where they finally could let go of their fears and might be able to sleep for a single night without nightmares, secure behind a fence guarded by American soldiers. But he who seeks finds not always what he most long for. What they do not know is that their ordeal is just to begin.

Craig DiLouie has written a novel stuffed with zombies and the most imaginative monsters, that act as catalysts. The looming dangers and massive terror makes it a novel that puts the finger on human interactions and reactions. It is a story as much about loss and excessive stress, as action and zombie mayhem. Like the previous novel Tooth and Nail, DiLouie succeeds in depict a number of different individuals and shows their strengths and weaknesses. And most importantly – gets the reader to feel differently about them in different situations. Nothing is just black or white. And DiLouie is doing this without having to spread the story over a thousand pages.

The story lathes past and present. In flashbacks, we learn what the main characters experienced during the weeks before the disaster. DiLouie has a wonderful ability to combine suspense with psychological edge. This is a introspective book at large, but it feels believable and the story has deeper layers. Examining the text shows clear that the necessary research is done with precision and the scenarios are depicted with both empathy and imagination.

The Infection is a novel that challenges. It moves across genre borders and certain aspects are stumbling near to make me recoil. But I am confident and I like it. One of the things that make me come to appreciate DiLouies's writing so much is that he is always serious. By that I mean not that he is dull, quite the opposite, but although he this time portrays not only the infected and the undead, but also throw in monsters in the form of smaller ape-like creatures as well as pure giants he does not abandon the realism of the petition. He believes in his concept, he makes no apologies or excuses with misguided humor or irony sneers.

It is simply very good and damn exciting. Craig DiLouie is a writer who has come to conquer and claim his place among the truly great names in the genre.

You have subscribed to alerts for Craig DiLouie.

You have been added to Craig DiLouie's favorite list.

You can also sign-up to receive email notifications whenever Craig DiLouie releases a new book.