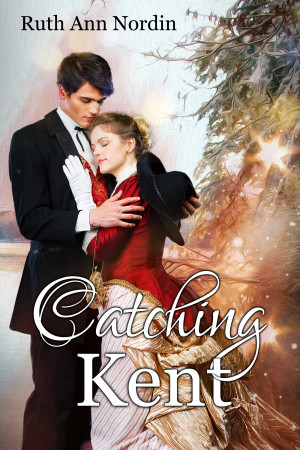 Rated 5.00/5 based on 2 reviews
Rose Larson always gets what she wants, and in this historical western romance, she is determined to do whatever it takes to marry Kent Ashton. More
After spending time in Ireland, Kent Ashton has returned to America. It’s his chance at a new start, and he’s determined to go all the way to California–far away from his past and the list of regrets he’s left behind. But while in Omaha, Nebraska, thieves rob him and leave him for dead in an alley. That’s when Dave Larson finds him and brings him home so he can recover. As soon as Kent is better, he plans to continue his journey to California.

But Dave’s daughter, Rose Larson, has other plans. She’s bound and determined to make him her husband. Sure, he might protest, claim he’s not the right one for her, that she’s better off with someone else. But she’s not one to give up, and if she has to chase him to get him to the altar, then so be it.

Catching Kent By Ruth Ann Nordin
Nebraska Series
Kent Ashton has just returned to America after over six years with his uncle in Ireland. His past has never left his mind, his dislike of his parents and his failed venture with love. On his way to California the train stopped in Omaha and Kent's life took another turn. Was it really a turn for the worst or was it fate?

Rose Larson is opposite of her twin sister Harriet. Rose's outgoing personality seems to attract both people and animals. She also goes after what she wants. And she wants Kent. She believes everything that happened to him was to bring them together.

Kent's story starts in Falling In Love With Her Husband and moves on to the prequel Kent Ashton's Backstory, which mirrors the first book from Kent's point of view. Things have never been easy for him and life has proven that money does not bring happiness. Although, how can one not be happy when in the presence of the Larsons? After all, Dave Larson is the most beloved fictional character ever. Just ask him.
**Sexual content within marriage
http://justjudysjumbles.blogspot.com/2011/09/ruth-ann-nordin.html