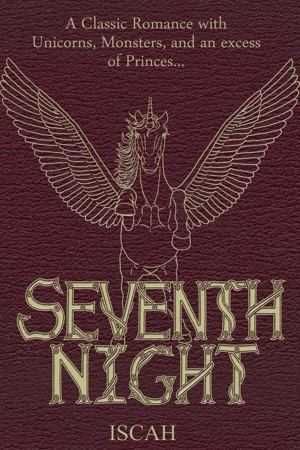 Reviews of Seventh Night by Iscah

Disclaimer: I received a free copy of this book in exchange for an honest review.

And, to be honest, this is one of the best books I have ever read.

To start, the cover is well done. It looks almost exactly like the design of the AD&D Complete Handbook series from TSR, but I don’t know if Iscah is a Dungeons and Dragons gal or if this is coincidental. Regardless, it is fairly plain, but this nests well with the way the book is designed and arranged. It is also appropriate as pegasus (as Iscah pluralizes the word, and accurately, as she explains in the notes) and unicorns are featured in the book. The interior maps are semi-professional, by choice. They add to the overall aesthetic and really help with understanding what is going on since the book involves, to varying degrees, the interaction of several domains, at least in the background. The book is divided into Acts and Chapters, which adds a dramatic element, obviously, and it does make the book seem more engaging.

The book involves a number of characters, but the protagonist is a heroine, Seventh Night, who is named after a harvest festival. Once I could get Shakespeare’s Twelfth Night out of my head, this worked for me. Iscah is telling the primordial faerie tale as if this is the original telling. As I was reading, I kept thinking, “Oh, okay, that’s where THAT comes from,” but, of course, it is the other way around, or is it? Faerie tales, part old wives’ tale, gnomic device, and psychological crux for how we humans view and deal with the world, are in a constant state of flux. Many of the tropes of folklore are present. Iscah handles these well and gently so they are never overriding or interfere with the story flow. Rumpelstiltskin, Snow White, and others are alluded to, or perhaps I should say, certain plot elements are shared. The presence of these tropes actually serves to make the story more enjoyable as it creates a sense of nostalgia for the world that never was and always will be. It reminded me of Tolkien in this respect.

To say it plainly, Iscah has simply written a rousing good tale. The story is not mere dross smeared over a faerie tale canvas. The story would work on its own as the characters are well-developed, the interaction between characters believable, and the villains even have redeeming qualities (and we get to see some of their points of view, which is always a plus in my book). I fell in love with all the female characters except the haglings—some of whom, you might imagine, were actually maidens in disguise, which means I fell in love with them, too, afterward, but I digress. No, I don’t digress. I have a major crush on the sorceress (later Andomare); I haven’t been in love with a character so strongly since Laurana from Dragonlance or Eilonwy from The Prydain Chronicles. Anyway, the story follows the adventures of different sets of characters, with the primary being Seventh Night. Iscah switches back and forth between groups, including villains, and this makes the story fast-paced and gripping. The addition of the universal faerie tale tropes as mentioned above serve as the icing on the cake that is the story itself.

The story itself is a romance, in the literary sense, in the vein of Shakespeare’s The Tempest or Arthurian legend. The combat scenes are exciting but not graphic. There is no profanity or sexual content, and I am pleased to see new authors writing clean material that is up to snuff—or better, in this case. The world is enchanted, but not in an over the top way. Again, it would be along the lines of Arthurian legend, the world is much more fantastic and dangerous than our world, but enough of the normal is there to make it realistic and recognizable. This is a stylistic I truly enjoy. The book contains wizard of varying degrees of power, the creatures I mentioned above, and other folkloric entities such as a Cyclops, a sea serpent, and a moat monster. It is set in a sword and sorcery world, so there are knights, damsels in distress, and plenty of other fun things to encounter. My only fault with the book is that it is too short. Fortunately, Iscah is at work writing new material for the setting, including a new book about my girlfriend Andomare (hey, this is a fantasy, right?) Other characters are going to be addressed in the future, too, which makes reading Seventh Night an even better investment of your time.

For some reason, I wasn’t into the book until the second chapter. I don’t know if I was just “off” when I started, or if it took me this long to get into the style. In any case, if you feel the same way, stick with it because there’s tons of good stuff headed your way. I recommend this book to anyone who likes fantasy, faerie tales, or just a good story, in general. The writing style is easy to read, the action and events interesting, and the book is error-free. There is the happy ending one would expect, but it was achieved in a way I did not expect, which I guess makes it a surprise cliché ending. Read it, and you’ll see what I mean. I am very much looking forward to reading more from this author.

First let me thank Iscah for lending me Seventh Night to write an honest review on. This was a totally awesome book and I had a hard time putting it down. Seventh Night has a bit of everything in it from your fairytale characters (Prince,Princess,Witches and Wizards) to your mystical creatures (Unicorns,Pegues) and your non mystical creatures such as Cyclops and Two headed sea monsters. Even though this is an Fantasy novel, it was quite uncanny. In fairytales you think of happy endings/ever afters well happy anything and everything rite. Wrong, Seventh Night does have your all time romance smoochy smooch parts but it's also full of lies,deceit,deception and betrayal.

You have subscribed to alerts for Iscah.

You can also sign-up to receive email notifications whenever Iscah releases a new book.