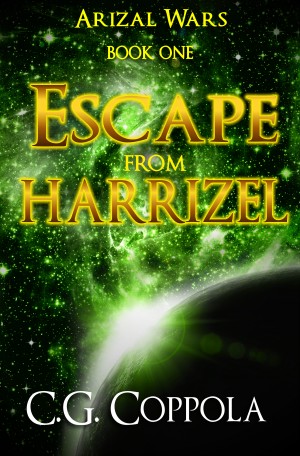 Rated 5.00/5 based on 1 reviews
Fallon is just like every other Arrival brought to Harrizel—an alien planet restoring the human race after a fatal war left Earth in ruins. But once viewing the all-day work camps and the nightly, orgy-like atmosphere, Fallon suspects her hosts, the Dofinikes, might have a secret agenda of their own. More
With everything on a strict schedule and talking forbidden, Fallon makes up her mind to escape. Finding it’s harder than she expected, hunger forces her to turn to the Market—an underground system run by two rival Clans. It’s after an unexpected excursion that she crosses paths with Reid, an ex-Clan member who seems to know more than he's letting on, especially why everyone is so eager to do everything he says.

But with his newfound attention, the Clans have taken an interest in Fallon. The Dofinikes want more repopulating and with people going missing, time is running out. Fallon must solve the mystery of her rescue and discover the truth behind Earth’s ultimate demise, all while protecting her heart from the one man who could shatter it forever.
Download: epub mobi (Kindle) pdf more Online Reader
rtf lrf pdb txt
Price: Free! USD
Add to Library
Create Widget
Tags: romance blood sex science fiction aliens war secrets space travel abduction weapons oppression labrynth clans fleeing hidden passages
About C.G. Coppola

C.G.Coppola is the author of the Fantasy Adventure series, Arizal Wars. In addition to short stories that explore magic and the paranormal, she writes books that involve a lot of kissing, kickass heroines, and fighting alongside best friends. When not writing, C.G.Coppola can be found watching Netflix, playing with her dog, Appa, or trying not to mess up a recipe she found on Pintrest.

First I have to say this was an awesome book! We all bandy about books we can't put down, but this was really one of those in those in the most literal sense, in fact I made my family mad (they got over it) and sloughed off work to finish it because I had to KNOW what happened next.

Fallon wakes up in a small house, disorientated, and in the company of a man she doesn't know. It's not only her companion that's unfamiliar; she doesn't recognize anything, including herself. With the promise that her memories will return soon, she is whisked away to Harrizel, a planet run by an alien species who are "rescuing" the humans from a war ravaged earth.

But Fallon doesn't even remember the war.

Despite her desire to escape to the lush jungle surrounding the compound she's forced to call home, Fallon soon falls in with a group of fellow refugees, including the child Pratt, her new bestie Abel, and the tasty Reid, and discovers a dark, sinister secret under the facade of friendly help that the aliens are offering.

Can Fallon and her new found friends stop the disappearances, or will they be the next victims?

As I said, I loved this book! Like a good anime, the beginning leaves you scratching your head, and then slowly the puzzle pieces fall into place and leave you shouting "Aha!" The romance is well done - I had several "squee" moments - and I didn't see several of the plot twists coming, which is a nice change. I'm looking forward to the second book!

You have subscribed to alerts for C.G. Coppola.

You have been added to C.G. Coppola's favorite list.

You can also sign-up to receive email notifications whenever C.G. Coppola releases a new book.