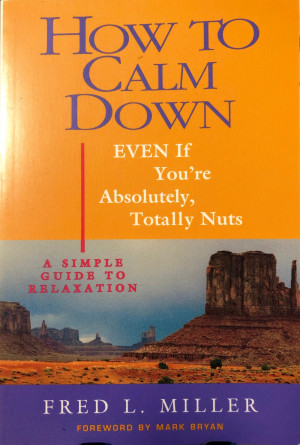 How To Calm Down Even If You're Absolutely, Totally Nuts


Fred L Miller
Author of the Top Ten Best Selling
How To Calm Down Even If You're Absolutely, Totally Nuts
And
Yoga for Common Aches & Pains

After years of being a student of the more aggressive forms of martial arts, Fred L. Miller became a yoga practitioner and yoga therapist. As a result of his more than thirty years of study, he has acquired esoteric knowledge about the body, mind & spirit and is now dedicated to making that knowledge accessible to everyone.
With the intention of sharing this knowledge, he first wrote How to Calm Down Even If You're Absolutely, Totally Nuts (Namasté Press, 1999), which had three self-published printings, two subsequent printings from Warner Books beginning in 2001, and was translated into five languages. His second book, Yoga for Common Aches & Pains (Perigee Books, 2004) followed.
Profiles and articles about Fred Miller have been published in the Los Angeles Times, Shape magazine, Real Simple, Better Homes & Gardens, Fitness, and Natural Health magazine. For several years, he wrote the meditation column for L.A. Yoga & Ayurveda Magazine (articles can be found at www.howtocalmdown.com). In addition, he has appeared on many national radio and television shows and been interviewed about health and wellness.
In rounding out his knowledge of various practices, he has also been a student of Tai Chi, Chi Gong, Aikido, Alexander Technique, and Feldencrise in addition to practicing yoga and meditation for the past twenty-eight years and teaching for twenty-six years. Also, Fred has walked on Fire.
Miller has expanded his knowledge by traveling and studying in India, Nepal, Tibet, Jerusalem, the Lakota Pine Ridge reservation in South Dakota and the Peruvian Amazon rainforest. He has lectured at the UCLA School of Medicine, taught relaxation techniques to cancer patients, and was certified by the California State Bar to teach meditation to attorneys. He has conducted workshops at the Southwest Yoga Conference and at Rancho La Puerta, in Mexico, and is a Blue Cross of California provider of Complementary Medicine
While working in television for twenty-five years, Miller found that yoga and relaxation techniques saved his sanity and facilitated a long, successful career in the entertainment industry. To date, his retreats, workshops, and classes have served more than 100,000 students.
Miller earned a Bachelor of Arts degree in communications from San Francisco State University. He is an Ordained Minister. In addition, he is an Executive Coach certified by the Professional School of Psychology by the state of California as well as a member of the National Speakers Association, International Coach Federation, Professional Coaches and Mentors Association, Writers Guild of America, Directors Guild of America, PEN, and the International Association of Yoga Therapists.
His past clients include Mark Victor Hansen’s Millionaire Summit, UCLA School of Medicine, Lucent Technologies, AT&T, Mark Bryan Productions—The Artist Way at Work seminars and SOTO–USA Chiropractic Association.

Reviews of How To Calm Down Even If You're Absolutely, Totally Nuts by Fred Miller

You have subscribed to Smashwords Alerts new release notifications for Fred Miller.

You have been added to Fred Miller's favorite list.

You can also sign-up to receive email notifications whenever Fred Miller releases a new book.