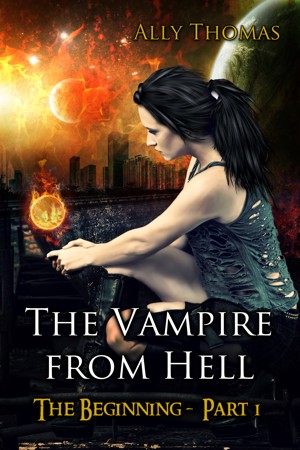 The Vampire From Hell: (Part 1) - The Beginning

By Ally Thomas
Rated 4.13/5 based on 16 reviews
According to Rayea, the oldest daughter of Satan, the origin of vampires started in Hell, and it started with her. This story also includes "A Vampire Among Angels (Part 2)" of the series. More
Rayea isn't daddy's little girl, even if he is the most powerful fallen angel around. He wants her to take an active role in the family business. But she's not interested in his schemes for world domination. Instead she wants to spend her time shopping on the Internet, rescuing humans from a horrific eternity, and practicing martial arts with her seven foot hellhound. Then one day everything changes.

Ally Thomas loves writing fantasy and paranormal books that showcase vampires, werewolves, zombies, witches, and any furry monsters who go bump in the night. Her paranormal fantasy series, The Vampire from Hell remains a favorite among fans. To learn more or send Ally a note, go to www.allythomas.com

About the Series: The Vampire from Hell (Season 1)

Begin the journey with Rayea, the Vampire from Hell. According to Rayea, the oldest daughter of Satan, the origin of vampires started in Hell, and it started with her. Rayea isn't daddy's little girl, even if he is the most powerful fallen angel around. He wants her to take an active role in the family business. But she's not interested in his schemes for world domination. Instead she wants to spend her time shopping on the Internet, rescuing humans from a horrific eternity, and practicing martial arts with her seven foot hellhound. Then one day everything changes.

Also in Series: The Vampire from Hell (Season 1)

I have to say this series is one of my favorites! A vampire spawned by Satan is a fun concept. Making her a good vampire ready to fight her evil father is even better! A must read!

It's not easy being Satan's daughter especially when you want to save humans from the fate he has in store for them. But when she gets caught helping them, Daddy is not very pleased.

I was a bit unsure how to rate this one, going between 2.5 and 3 stars. It was interesting enough to read and I liked the pet hellhound Blick. He was pretty cool. I didn't fully connect with Rayea though she was a decent character but I didn't dislike her either. The story was well written and delivered and I can't really say that there was anything about it that annoyed me or anything. But it was just lacking that something for me to give it a higher mark.

Random irritation: at one point Rayea says she can imagine herself as Sarah Connor in the Terminator, looking all toned and ready for some fighting action. Well it was actually Terminator 2 that Sarah was the ruthless action hero, not the original film where she was a quivering wreck! Things like that tend to bug me! I did NOT mark down for that though coz that would be dumb and pretty unfair!

If you've been following the tale of Rayea, daughter of Satan and vampire heroine, you know things aren't always as they seem. This followup to The Vampire from Hell series is packed with plot twists and turns that will keep you on the edge of your seat. Great job, Ally Thomas!

I LOVE Rayea's story and the great spin Ally puts on the "Vampire" themed books. This story is a little bit of everything and a great yet "short" start to an awesome story line! Go Rayea! :)

The vampire has been overplayed alot in movies, books and tv but this is the first of a vampire from hell and I loved Rayea as a character she has it all.

Rayea is a vampire and she’s also the least favourite daughter of Satan (he has a problem with the fact that she likes humans). Oh and she’s a blogger too. Pretty cool right? Rayea lives in hell and enjoys shopping on the internet; this left me wondering how delivery works but moving on. Her father, the devil himself enjoys torturing her, and her evil sister Stephanie has it out for Rayea. Her only ally is a seven foot friendly hellhound.

A good introduction to a new supernatural series and funny in parts. I laughed out loud when Stephanie asked Rayea what she was doing on the internet. “Mindlook. Twizzler?” to which an exasperated Rayea replies “It’s Facebook and Twitter.” This is a free teaser. If you like a different sort of vampire story check this out.

Loved it!!!!! I want to buy the other books of this serie!

It all starts with a girl; named Rayea that is the daughter of Satan/Lucifer that is tired of the torture that her father likes to do to humans. She likes the humans, and because of that he wants to kill her. And besides all that she's a new type of vampire. The story is told by her as she writes it in her blog. Lol. She was not very strong like her sister, Stephanie, and being demons their father wanted them to be stong - but hey she has this cute hellhound named Blick that makes her feel better; is like her companion. Rayea has pale skin and black hair. Anyway Rayea is working to give the humans like a second chance, returning humans to a second level of Earth. In hell there were no mirrors! The thing is her damn father is such an ass! he even beats her! the thing is she's different because Lucifer made this new wine that creates someone into a vampire; he poured some blood of his own and when Rayea woke up, she had no pain but she had fangs! the creation consist of: a green wine, satan's blood, and a blessing from the ancient snake goddess, Mehen (which Satan form at that moment was of a snake), created an unique vampire. SHE WAS A HUMAN! that's like what?! she's not really a demon. Her mother was a worshipper of Ra the Egyptian God of sun (funny thing she had something of Ra).... and Satan raped her mother!
In the end of this book her hellhound decided it was time to escape... perhaps to heaven...

I loved this book. Waiting for the next installment to come out, hope it'll be out soon. Like poster before me I'm hoping author does not charge a huge amount of money for future books. I see that as a possible problem for me and E-books. The first hit is free then $10.00 for the next fix. Hey that sounds kinda like a pusher. Love Smashwords becuase I get to read authors I'd never even think of trying before.

You have subscribed to alerts for Ally Thomas.

You have been added to Ally Thomas's favorite list.

You can also sign-up to receive email notifications whenever Ally Thomas releases a new book.