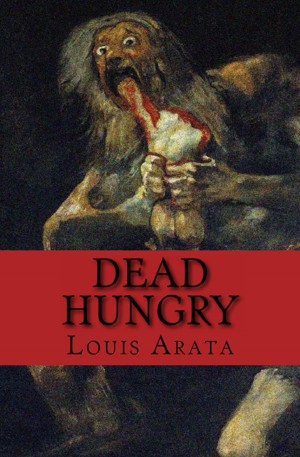 Louis Arata is a longtime resident of Chicago, where he has worked a variety of jobs, including debriefing gang members, building databases, and reconciling million dollar budgets. For fun, he is involved in theatre. His play, A Careful Wish, was first performed in 2008.

He is currently working on a sequel to Dead Hungry.

Chicago locations in Dead Hungry
Where The Ghouls Are: A brief tour of some of the locations featured in the novel Dead Hungry. Check out Graceland Cemetery, the Loop, and Northwestern University campus.

As I was reading “Dead Hungry”, I kept finding myself trying to pick a label to put on it. Horror? Post-apocalyptic? Even science fiction at one point (Robert A. Heinlein’s definition mostly). By the end, I settled on ‘intelligent horror’. While there is a lot of detailed gore in this book, it isn’t the horrific part. The horror comes from the personal and social impact of the reason for the gory bits.

Cannibals, self-identifying as ‘Ghouls’, live among us. Peaceful folk with a particular dietary requirement. They’re happy with meals already dead, ‘donations’ or a discreet fell-off-the-back-of-a-hearse acquisition. But when they’re exposed to the mainstream, that all changes. As more and more people become aware of the concept, the number of Ghouls starts to increase, and as with any new fad, there are splinter groups—most notably the ‘Feeders’, who go around hunting their food. It starts off small, taking the homeless and using the transitory nature of uni students to cover disappearances. Then they start to get a little more visible, taking people from car accidents (which the Feeders may have caused), snatching the unwary off the street, stalking prey in the open.

These people are not zombies or vampires or any sort of mythological predator. They’re humans. Living, breathing humans capable of rational thought and actions. And that’s where the horror comes in.

The story explores the idea of this radical social change through the impacts it has on a bunch of post-grad students and their families and friends. As you would expect from such a group, there is a lot of social commentary and analysis and, yes, drama. There are multiple POV characters and each has a distinct voice and opinion on the unfolding revolution, from the purely repulsed, to the academic who wants to understand, to the cannibal-curious and those who end up jumping in whole-heartedly. It explores the whole range of intellectual and emotional responses, never shying away from the ‘reality’ or consequences of the characters decisions.

All along, as things became more and more dire for the main characters and society as a whole, I kept trying to work out how it could end. This isn’t some monster movie, ala Godzilla, where the badies could be lured into the one place and destroyed in some spectacular manner so the rest of the world could get back to normal. It’s probably closer to “The Walking Dead”, where the overall story of the world being overrun by some unstoppable force never changes, but the individual stories of the survivors can, and do, end. Each character in “Dead Hungry” finds an end, of a sort, to their story. Some are positive, some end in death and some, perhaps most realistically, are rather ambiguous. There are few easy answers for these characters and, therefore, for the readers as well.

Occasionally the story does steer a little too close to soap opera. The family history of one of the main characters gets a little too coincidental at times. The writing is very good, evoking the sense of the city as it undergoes this change. One problem I had, however, was the head-hopping. It was distracting to flip from one POV to another mid scene, often causing confusion as to who was thinking or feeling what at any one time.

Overall, the story is compelling and engrossing. Recommended for people who want a different sort of horror story with intelligence.

You have subscribed to alerts for Louis Arata.

You have been added to Louis Arata's favorite list.

You can also sign-up to receive email notifications whenever Louis Arata releases a new book.